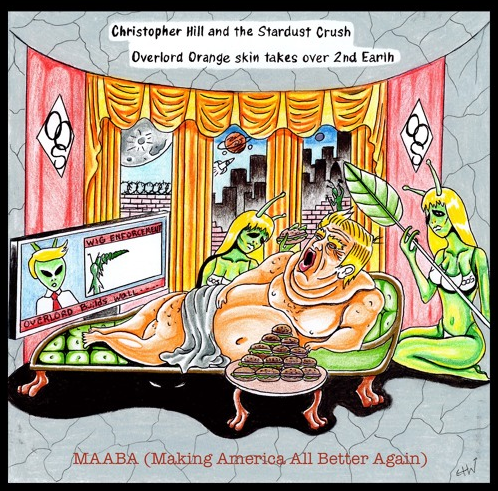 Christopher Hill & The Stardust Crush are a band out of Seattle, Washington, with a unique take on the current state of United States politics. Rather than taking the traditional dystopian approach – this four-piece rock band combines folk, disjointed rhythms and harmonies to create a sometimes wistful, but trippy collection of songs in their seven-track album, MAABA (Making America All Better Again).

Out of the gate is “Alien Anthem”, a just over two minute garbled, static concoction. It has electronic burps mixed with a science fiction-like flare. The ending of the tune is the sound of crickets along with helicopter chops. It’s very strange, but perhaps that’s the point. It seems to set the stage for a very bizarre encounter, just as the state of affairs the world is currently in.

The title track is trippy. Still, it has a memorable guitar riff – very bright and melodic. The guitar work also has an underlying sadness. The lyrics “put the Cheeseburger in me/ put Fox News on the TV …oh poor me…,” seem to paint this idea that the fast food nation has given a 99-cent menu item on liberty and the United States’ constitution. What is surprising is the distorted sounds and creative sound effects. This song, taken out of context, might be a very happy tune. It’s not dark and dreary.

“Mrs. Liberty” has some real soul to it and really stands out on MAABA. Beautiful, female backing vocals culminate on the chorus: “Tell me now what I should do, Mrs. Liberty / what should I do / do you have a place for me?” It’s wonderful harmony.

“Thoughts and Prayers for the N.R.A”, “Vote For Change” and “Pink Hat” all have similar vibes and points of inspiration. The final song “Golden Hair and the Ghost of Christmas Future” celebrates the quirkiness and artistic platform Christopher Hill & The Stardust Crush seem to excel. According to their bio, influences like R.E.M. and Bob Dylan inspired their foundation. These are especially evident in “Pink Hat” and “Golden Hair.”

So what does all this mean? It means a band like Christopher Hill & The Stardust Crush amplify the anxieties and the uncertainties in the year 2019, and capture the spirit of American artists giving the symbolic middle finger to what’s happening in Washington D.C. It means they are a band that stands for something and more than creatively tells a story that it’s not okay what’s happening and that it’s something that if you’re not paying attention, then you better.

Christopher Hill & The Stardust Crush’s MAABA doesn’t fit into a formula. They are a boundless band and could easily fit alongside a punk band, a spoken word festival or even a world music concert event. They have a voice. It’s a strong voice and while some might be turned off by the political nature, it’s worth listening to songs like “Mrs. Liberty” and “Pink Hat” at the very least for interesting percussion twists, exceptional harmonies and a whole lot of musical firsts.