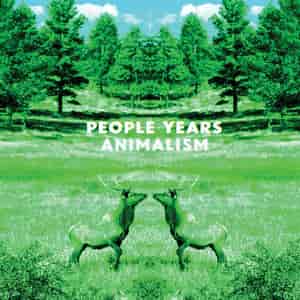 At times droning in the background like a stream that will meet no end, in others as well-defined by jazzy complexities as it is a violent muscularity, the grooves that power songs like “Fall in Love,” “Commonly Known” and “You Don’t Do Nature,” are as potent a force as any other you’ll find when listening to People Years’ debut album Animalism this April. A good beat is often the cornerstone of any magical rock record, but in Animalism, rhythm is as valid a contributor to the poetic narrative of the music as any lyrics are, making tempo and tonality essentially an extension of whatever emotion the instrumental harmonies would seek to impart.

Melodically speaking, this is easily one of the dreamier LPs I’ve heard out of the American underground this spring, but I wouldn’t be quick to tie People Years to the swelling population of psychedelic revivalists capitalizing on the surrealism trend in the western hemisphere at the moment. There’s too much experimentation in “Not Really Surfing” and pop prowess in “Fear Culture” and “Your Locket” for that to be the case (which, from where I sit, is hardly a bad thing given the negative connotations of being a part of any movement in music these days).

The production quality here feeds into the postmodern stylization of the music wonderfully in “Roadkill,” “Animal Taxxx,” “Recognizable Animal” and “Commonly Known,” and were Animalism not given as avant-garde a varnishing as it was, I can definitely see where some critics might have relegated its tracklist to the pile of noteworthy (but hardly life-altering) indie rock collections to debut in 2020. Every detail in this LP is carefully arranged to keep us on the edge of our seats from beginning to end, which isn’t exactly something that can be said about some of pop’s biggest headline-makers this year.

I found the vocal to be a perfect complement to the instrumental swing of “False Start,” “Animal Taxxx” and “Not Really Surfing,” but I don’t think its presence necessarily qualifies as the most communicative element to behold in this record at all. On the contrary, People Years come at us from every angle in Animalism – the guitars, the bass, the drums, everything here is an agent of evocation, making it impossible for listeners to walk away from any of these songs without feeling some kind of an impact from the harmonies that drive them home.

While this is only their first studio album, I think that, in even the most cursory of listening sessions, it’s easy to see why People Years are attracting the buzz that they are right now. Animalism is a credible debut from a group of players who clearly know the kind of music they want to make, and moreover, become known for, and though there’s still plenty of room for continued growth on their part, there’s no disputing that this band is going to do some amazing things together as long as they’re in this game. Simply put, this is top shelf indie rock for discriminating fans of all ages.