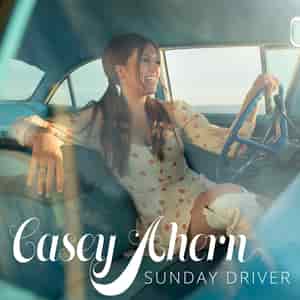 In her latest single, titled “Sunday Driver,” Casey Ahern continues to shine from behind the microphone with her unique fusion of pop pleasantness and humble country harmonization, with her voice unsurprisingly taking center stage amidst a colorful musical backdrop. Ahern approaches her verses with a gentle energy in this track, lending agency to the words with a style of execution that takes as much from traditional Americana as it does modern alternative pop, and though her aesthetic here leans more on the conservative side than it has in her last two big hits, I wouldn’t say that she’s making a grand departure from her signature sound at all. Although she’s not the singer she was two years ago, personally I think she’s much better equipped to manage this kind of material now than she has ever been before.

There’s a lot of emotion in virtually every element of “Sunday Driver,” from the subtle moan of the keys in the background to the vibrant strut of the guitar in the tiny spaces that exist between Ahern’s lead vocal and the drums, but it would be criminal to say that each of these components doesn’t play a big part in making the track accessible to us. There’s no fluff to behold here; the muted swing of the drums acts as a buffer to the warmer melodies coming off of the strings, creating a tone of reflection in some spots while sparking a provocative energy in others. “Sunday Driver” isn’t your run of the mill crossover single – there’s heart in these harmonies, plain and simple.

To a large extent, I think this song might be the most fluid of any that Casey Ahern has stuck her name on in the last couple of years, and ironically, it just might be her most bucolic in narrative, as well. I think that, in order for her to break away from the underground and finally stake a claim to some space in the mainstream market, she would do well to explore her country side a little more than she has prior to now – much in the way she does in “Sunday Driver” – because of if this is the caliber of content she produces when that kind of experimentation happens, her core identity could lie more in Tennessee tonalities than it does in California-style crooning.

It’s official: Casey Ahern is coming into her own and making her best music yet with the release of “Sunday Driver,” and if you’ve somehow missed out on any of the music she’s cut before dropping this single, there’s never been a better time than now to get into her work. “Sunday Driver” is a barebones ballad with a pumped up kick in its hook versatile enough to put a smile on any melody lover’s face, and though it’s not the most elaborate new track that I’ve had the pleasure of listening to in 2020, it’s perhaps one of the few releases I would seriously recommend to both country and pop enthusiasts this February.

We’ve covered Ahern’s Just a Dance and He Was Summer over the last few years.