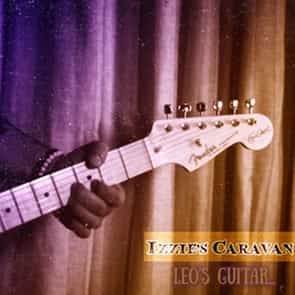 Few genres in the pop music lexicon have been as consistently popular as the blues have since its inception. No matter what seems to be going on in the world around us, there’s always a good blues song out there to suit the mood at the moment, and in Izzie’s Caravan’s Leo’s Guitar, there are four such songs ready and waiting for fans to appreciate. Leo’s Guitar is a barebones blues-rock record that doesn’t ask a whole lot from its audience in exchange for a retro-flanked journey into the depths of a bitter bayou sound, and in modern times, that’s sadly asking a lot out of a record like this one. Izzie’s Caravan don’t play any trite pop/rock gams with us here – from beginning to end, they perform like their lives depend upon precision.

There’s a lot of urgency in this tracklist, starting with “Two in the Bush,” and even in slower songs like the deliberate “Dorian’s Lament.” Whether they’re manipulating easygoing beats into hurricane-like harmonies ala the title cut or simply unrolling a molasses-like melody in the old school “Lightnins-A-Howlin’,” they’re always focused and in perfect sync with each other. Nothing in this EP sounds as though it were spliced together in some haphazard attempt at artsy experimentation; for the most part, Izzie’s Caravan play the part of conventional blues players quite well (though it’s worth noting that their natural charm surpasses that of the mainstream status quo by leaps and bounds).

The passion in Leo’s Guitar is simply off the charts, and whether that’s coming from a personal investment in the lyrics of “Dorian’s Lament” or some kind of spiritual connection with the righteous riffs that collide into each other at breakneck speeds in the title track of the EP, it’s undisputedly what makes it so hard to put down. I don’t believe that any of the chemistry in these songs is being forced by the individual players, nor producers behind the glass, but rather coming as a result of a shared love of the blues that transcends everything surface-level in this life. All of these songs are stage-ready and flexible enough to jam on if provided with the right setting to make it happen, and I for one can’t wait to hear what they sound like live.

I didn’t know much about Izzie’s Caravan prior to getting my own copy of Leo’s Guitar, but as a blues aficionado, I can vouch for its authenticity and addictiveness wholeheartedly. There are a number of different directions that this band could take their creative stylings in, but if I were in their shoes, I’d recommend sticking to what they clearly know how to do best – shredding through straight-shot blues-rock. They’ve got a so much momentum in this record, and as long as they continue to refine their attack through the years, they’re going to become one of the most respected units on either side of the country. I’m a fan for sure, and other blues connoisseurs who get a taste of this EP’s four songs will likely share my sentiments.