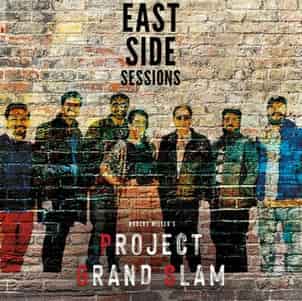 Innovative and instantly connecting with the listener, the 12 songs on the new album Eastside Sessions bridge the gap between jazz, rock and even Latin-flavored music. Proving once again that big sound gets big results, the veteran group, Project Grand Slam, have been doing this since 2007 and show no signs of stopping.

New York City’s Project Grand Slam have thrilled audiences far and wide. While we’re at the disadvantage of missing out on live music, Project Grand Slam’s Eastside Sessions (the band’s ninth album) showcase the synergy and palpable energy with bassist and leader, Robert Miller, Marcello Casagrandi and Baden Goyo on keyboards, Tristan Clark on guitar, Joel E. Mateo on drums and Guillermo Barron Rios on percussion. Vocalist Marilyn Castillo is new to group, as is saxophonist on vocals) and Alex Blade Silver.

Immersive songs like “The One I’m Not Supposed to See” and “Constable On Patrol” are the first two tracks. “The One” lyrically suggests the idea that we don’t often let others see our true selves, that one person can bring out the best in us. Or is music that really reveals our truest personality? Preaching to the choir, right? The line, “the one that makes me jump and shout” made me delve into those moments where you feel like you’re creating your own life soundtrack. In “Constable” I felt like Miller’s bass work just engulfed me (in a good way). I loved how the line “each night when you’re home alone, and you toss back into your bed, that’s the time when the demons fly…” and it made me replay in my mind all the times that I do just the same. I review, I get stuck laboring over what I said to a loved one, how I should have said it.

“It Is A Miracle To Me” is a summer song. It’s just bright and warm. Castillo’s vocals move along like a wave, and the percussion and drums equally create drama. It’s such a fun groove.

I liked “Hey Jake” for its vibe and tone, but I couldn’t quite connect as much with the subject matter. It’s about bullying and tells the tale of a boy that’s trying to act like a man. I thought the sound and the music in “Hey Jake” was upbeat and catchy.

My favorite song is “I’m Falling Off the World”. It’s really a blast of sounds and felt like a perpetual rally. Like “Hey Jake” it might take on a more heavy subject, something more heady, but Project Grand Slam juxtaposes these diverging emotions. The music to “I’m Falling Off The World” is bombastic and moves the shoulders, gets you dancing – it gets your arms in the air.

If you like saxophones, lots of percussion and rhythms and vocalist that knows her way around a song, then Project Grand Slam’s Eastside Sessions will cover your bases. You’ll be safe adding this to your musical lineup, regardless of your favorite tastes. With some surprises along the way, with musicians that are at the top of their game, Eastside Sessions is a winner.