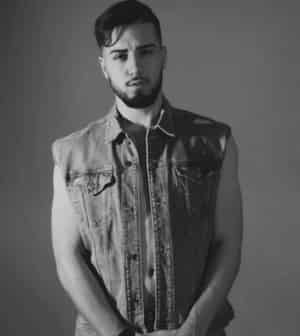 At first, the driving beat in “Habibi” is skewed with a reticence that suggests bittersweet emotion finally coming to the surface in the midst of vicious exchange between lovers. It doesn’t take very long for this reticence to fall under the weight of the pulsating bassline in the foreground in this latest single from Ilyah, eventually resulting in one of the smoothest rhythmic ebbtides of the new decade to date. “Habibi” has the feel of a melodic hip-hop song, but its core aesthetics are drenched in pop harmonies, sly serenading and an artful swing instead of rapping, and though it isn’t the only fun hybrid I’ve heard all year, it’s probably the best I’ve heard in the past month or two.

Ilyah’s vocal execution here is swift, to the point and far from the surreally-styled nonsense that a lot of indie artists actually have the audacity to brand progressive pop in 2020. Whether it be the opening verse or the lingering sting of the chorus, his words are always amplified by the tonality he offers their narrative through his singing. In some ways, “Habibi” is about as far away as you can get from the overproduced tininess of the mainstream pop scene because of its organic composition, and in others, it feels like a commentary about pop music itself, and specifically the people who have taken the reins over its development in the past five years or so. It’s not as scathing as what The Weeknd had to say in After Hours, but it’s nevertheless just as controversial (and cunning) from an artistic perspective.

Both the single and music video for “Habibi” boast strong production qualities, but honestly, I think the video is on a different level of cool compared to some of the indie content racking up the accolades in the underground press lately. There’s an ‘it’ factor Ilyah has that you can’t fake or replicate, no matter how much an artist or their producers might want for it to be present, and in this video, it bleeds through the screen most every time that his warm stare is in focus. It made me want to go back and relive “The Only One” and “Miscommunication” all over again (and I’d recommend doing so before checking out this latest release if you haven’t already).

Pop fans who weren’t listening to the music of Ilyah in 2018 and 2019 need to go out of their way to get caught up with him this year in “Habibi.” This Moroccan-born, Boston-based singer/songwriter is making pop great again in a year that could really use some friendly rhymes and swaying beats to shake off the remnants of a homebound spring. He couldn’t be entering the spotlight at a more pivotal time, and I think his commercial contemporaries would do well to take note of his ambitions in this new release. He’s going for gold here, and if his rivals aren’t able to match his precision and passion, the Hollywood music mountaintop is going to be his for the taking.