Setting down with Ivy Flindt 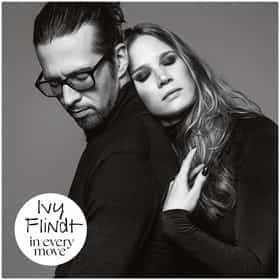 Can you give us a little background information about yourselves?

Hi! We’re Cate & Micha from IVY FLINDT. We released our debut album IN EVERY MOVE in 2018 on our own record label MARLAND RECORDS. We recorded our album in Sweden together with producer Per Sunding who is best known for his work with THE CARDIGANS on LONG GONE BEFORE DAYLIGHT.

How did you first become involved with music?

Micha: My dad played the violin in chamber music orchestras when I was young. I loved to hear him play and began playing the violin myself at the age of four. So I started off with classical music. A few years later I got intrduced to pop music of the 60’s and 70’s through my mum’s record collection: Rolling Stones, Beatles, Simon & Garfunkel, Donovan, Leonard Cohen, to name a few. Then I got myself a guitar at the age of 14 and wanted to be a rocker (which I thought might be easier with a guitar than with a violin).

What sort of work have you put into the recording and creative processes for In Every Move?

Cate: Working with Per Sunding and the drummer Erik Sunding was pure pain and pure pleasure at the same time! We simply wouldn’t stop until the four of us were all really satisfied with the result. No compromises!

Micha: For songwriting purposes, sketching ideas, we use our phones a lot. And pen and paper of course. Then, if we work on the arrangements, we record demos with Logic Pro and a simple audio interface. Really nothing fancy! For serious recording, we believe in the magic sound of magic recording studios like the Tambourine Studios in Malmö and the Atlantis Studios in Stockholm with their analog vintage equipment like their big Neve mixing desks, where we recorded IN EVERY MOVE.

Cate: Swedish Summer: When we were having a break during the recording sessions, we often drove along the coastline in Micha’s old volkswagen camper van. No air con, windows down, the golden light of the sunset: In these days we used to listen to artists like Conor Oberst, Beth Gibbons and Ron Sexsmith.

Everyone is going through a major life change with current events. What has it done to you as musicians?

Micha: Well, we would have been playing shows in L.A. in the end of March, in Canada, UK and Scandinavia in April and May. It would have been our first appearance in the US and we were really excited about it! We really hope that it will be possible to travel again soon… It’s a big financial issue too: We are a live band and without live events there is zero to minimum income which is a great challenge to say the least.

Tell us a bit more about any new music you’re working on. How does it differ from the material on In Every Move?

Cate: Our debut to me is a very intense collection of songs, we did our best to capture the meaning of every song. It’s quite fragil in a way. The new material, at this early stage of collecting ideas and testing arrangements and sound atmospheres, seems to have a slightly rougher approach.

How can fans hear When You’re Not Around?

Micha: We are very proud of our collaboration with the video artist Pete Winfield from Los Angeles with whom we produced the music video for the single, you can check it out on YouTube. Of course, you can stream the song (as well as the acoustic version of the song) on your favorite platform!

What role do you see for physical media move forward into the 2020s?

Micha: I personally totally love physical media: I love listening to vinyls and looking at the band’s artwork at a larger format than a thumbnail. I love the smell of paper when reading a book. When it comes to photography, I love developing my black an white films in my own darkroom… So I’m pretty oldschool.

Cate: I think most of the people love to stream music because it’s so cool to have it all in your pocket, your music follows you around wherever you go. To me in particular, it’s not so flattering to listen to music through streaming as I enjoy time without my phone a lot, without constant news updates, without messages reaching out to me. And as far as I know there is no streaming during flight mode? And if there is, I am sure to be the one with the low battery. But then there are others days of course on which I am incredibly thankful to have instant access to a particular song that comes to my mind.