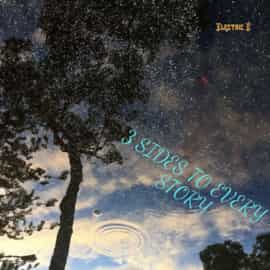 Few songwriters today can claim to be as eclectic as Seattle’s Electric E. A former resident of New York City, there’s no doubt the songs on  Babylon Music and  3 Sides to Every Story have a distinctly urban flavor, but Electric E never confines himself to electronic music alone.  Babylon Music is more varied overall than  3 Sides to Every Story – this is clear from the first song. The title track recalls Tom Waits in some ways and pairs light keyboards with a quasi-shuffle percussion pattern and what sounds like an upright bass. It’s a shame Electric E chooses to underplay the vocal within the mix as later songs illustrate he has a real talent with words.

“Next Big Thing” packs a muscular wallop. Electric E writes with cutting intelligence that never spares his target and his vocal strongarms the words thanks to the dramatic edge he brings to the performance. “Drifting into the Unknown” is one of the better instrumentals included on Babylon Music and testifies to his talent for conjuring powerful atmospherics with electronic instruments. It is, furthermore, to his credit that these instrumental tracks hang together so well you never take any particular notice that there aren’t any vocals.

“How Do You Think I Feel” is one of the more traditional tracks included on either album. Electric E sounds comfortable in this musical environment and the vocal phrasing during the verses builds to a memorable chorus. Atmospherics are key for the song “Middle East” as well, but they are toned down and married to a greater whole. The vocal complements the arrangement and vice versa. The musical keys to the track, however, are the brief bursts of bass laced throughout the cut.

3 Sides to Every Story will knock you out of your seat from the first. Sporting possibly the best melody found on either album, “Nitroglycerin Kamikaze” is as fine of an electronically powered instrumental you will ever hear. It’s an excellent way to kick this album off. The elegant piano playing running throughout “Hidden Meanings” and syncs up well with the electronic music without ever competing for space in the mix. The melodic strengths of the song may not be as vast as we hear with the opener but are still quite potent.

The electronic instruments once again drown out the vocals during the album’s title track. It’s a song with a few different faces but maintains an internal consistency that keeps it from veering off course. “Bring Yourself to Life” is one of the better instrumentals included on either album and its introspective, pensive mood distinguishes it from many of the other instrumentals. Electric E’s capacity for surprising listeners’ makes it even more impactful.

The organ heard on the track “Sunday Groovin’” is a perfect example of that capacity. It mixes surprisingly well with the array of synthesizers and other electronic instruments layered throughout the track. Taken apart or together, these two albums represent some of the most creative modern songwriting in an electronic vein, but Electric E is so much more.