The Side Deal release new Single/Video 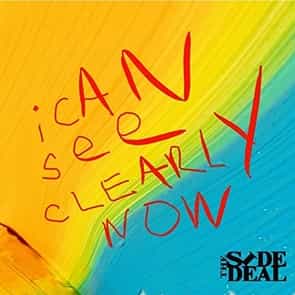 The Side Deal is not your run-of-the-mill rag tag band. These guys can play and they have themselves a solid hit in the updated rendition of “I Can See Clearly Now” out now via Goldie Records. If one song could encapsulate the hopes and dreams of a nation, and the summer of what to come, this is the time. “I Can See Clearly Now” is a bright, bright hit.

Originally written and recorded in 1972 by Houston, Texan, Johnny Nash. The song claimed the No. 1 spot on Billboard’s Hot 100 for four weeks that November. Exhibiting Jamaican tones from Bob Marley-influenced music, Nash’s song has since been re-imagined from several artists. Newer listeners might recall the 1993 Jimmy Cliff version that was featured in the movie Cool Runnings.

The Side Deal, a band comprised of former members of Train, Sugar Ray and current members of the band PawnShop Kings, distill their unique Southern California flavor into their version. Not quite surf rock, but possessing many waves of funky bass, roots guitar and swollen percussion, “I Can See Clearly Now” is an obvious Golden State export. It’s no surprise, then, that bassist Charlie Colin (Train), Stan Frazier (Sugar Ray), Joel Owen (PawnShop Kings) and Scott Owen (PawnShop Kings) evolve this song into a buoyant, sunny summer hit.

One of the things that is most noticeable is the percussion. Frazier’s tempo is similar to his work in Sugar Ray, but hints of The Rolling Stones (Charlie Watts) and Peter Michael Thomas (Elvis Costello) seem to eek through the glass. The fills are not too fest, and collide within the music bed without a total tidal wave approach. When the Owen brothers step in on their respective parts, the song stays true to the California tones, brash with 70s Laurel Canyon high points and rambling’ guitar strumming reminiscent of The Eagles meshed with Bob Dylan. Colin’s bass rhythms come through as a reflection of his time growing up in Huntington Beach, as well as the jazz influences from his time at Berklee School of Music in the melting pot that is the city of Boston. His bass work really kickstarts the entire flow and sets the tone for the exuberant music bed. Vocally, the song is a faster speed than Nashi’s original, but never drowns the listener in overbearing or over singing. It’s quite perfectly done and the listener feels limitless.

The Side Deal’s lyric music video for “I Can See Clearly Now” plays out like a best of the internet – people, places and lots and lots of smiles. In what sometimes looks like an ad for a Carnival cruise line, the message is just as clear it’s about celebrating life, honoring humanity and even remembering life’s smallest blessings. Fans sent in images and videos – some videos of themselves singing and even playing the drums. The Side Deal notes in the final frame that the video honors and gives gratitude to the first responders, front line workers and medical professionals taking the lead during the pandemic.