Cinemartyr deliver a violent yin to their rookie album’s yang 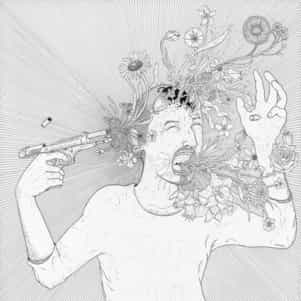 In their scathing follow-up to 2016’s stunningly eclectic Uncaused, Cinemartyr deliver a violent yin to their rookie album’s yang that immediately left me spellbound and intrigued by their growth in the last four years. Titled Death of the First Person, Cinemartyr’s sophomore affair is hardly the typical sequel; from where I sit, it’s about as different from its predecessor as it gets without abandoning the core values of experimentalism that gave the band’s first record its edge. Death of the First Person is a crushingly abrasive album designed to crater the earth beneath your speakers, and for what it was meant to do, it’s as strong an effort as we could have hoped to hear this summer.

Everything in this record could be described as brutish, from the moderately melodic hue over “CGI” to the bleeding bassline in “On Earth as It Is,” death march of “Run from Terror to Bring It Closer” and the swinging grooves of “Keeps Getting Up,” but I would stop short of calling any component here particularly indulgent. For the most part, Cinemartyr are pretty good about balancing the efficient with the catastrophically out-of-the-box, and while some of the material in this LP is more left-leaning than the rest, everything feels as though it belong together.

There’s definitely a strong hardcore influence throughout this tracklist, but the central aesthetics in “AR-15,” “Stab City,” “In Filth It Shall Be Found” and “Tunnel at the End of the Tunnel” are anything but puritan punk rock in nature. I found a lot of deep-rooted art rock and progressive technique in the compositional integrity of Death of the First Person, and though these two elements are almost never found in the same spot as a Black Flag-inspired intensity, they seem to fit in with the overall theme here wonderfully.

I love the use of distortion to merely accentuate the mood in “Sleep Is God,” “The Brain of Hideo Kojimaa” and the aggressive “CGI,” as it undisputedly sets apart this band’s approach to thick riffage from that of their closest contemporaries on the mainstream side of alternative rock these days. Cinemartyr are utilizing noise as a tool, not a centerpiece, and this is perhaps what endears their sound to lifelong punks like myself more than anything else. Cosmetics are fine when they assist in the advancement of a narrative, and beyond that, this is a group that knows than an expanded role would only lead to unwanted excess in their sound.

If you like raw and unfiltered artistry of the most postmodern variety you can get your hands on in 2020, it doesn’t get much more authentic than what Cinemartyr are serving up in the deliciously experimental Death of the First Person this late July. A far cry from the plasticized drone of the mainstream mundane, Death of the First Person is an album that will demand a reaction out of even the most dedicated of non-critics, and though it’s a heady dose of jarring sonic might, it’s absolutely one of my go-to listens as an alternative rock fan this season.