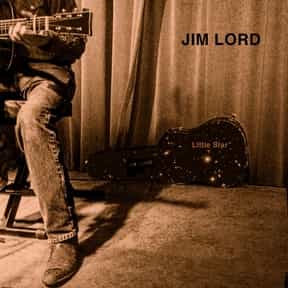 Jim Lord’s latest single is a lullaby for the ages. Playing on the words from “Twinkle Twinkle Little Star” and arrangement, Lord’s song “Little Star” has the artist gazing afar of the love of his life and what that person means to him. Humming his way to your heart, Lord’s simplistic approach of his voice and an acoustic guitar orbits above Earth.

Born in New Jersey, but based in England, Lord takes ample strength from his influences such as James Taylor and Leonard Cohen in the moving “Little Star”. Part folk and part lullaby, this song mesmerizes the listener with Lord’s every-man vocals and guitar strumming. On the surface, I felt like this song is isolating. The world seems to stop turning, like time stands still when Lord sings lonely spark caught my eye…in my heart you’ll always be. He hums on several instances and the listener joins him in this soothing act. His deeply heart touching song reminds that we’re not alone.

The lonely spark caught his eye line is such a beautiful moment. The guitar neck cracks at just that word intersection too, the strings cascading into a dark night. The timbre in Lord’s voice echoes that of a many that sung many nights in the corner coffee shop. He’s a master at observing from afar, spending his time commenting and truly pinpointing humans. I think songs like “Little Star” are more about human nature than a specific relationship. We are attracted to the downtrodden. We fancy ourselves as that little star not getting the same attention as the others. The whispers happening between Lord’s voice emulates a calm, a soothing mechanism. He drifts off, into unknown memories, and the listener emulates his sincere escape. His guitar skills match that tone, and brighten the pathway. In a perfect pace, his starry-eyed tale feels more than just looking behind to yesteryear. He feels refreshed and looks onward. His guitar gently travels the listener across his devised universe.

Lord’s quiet tale in “Little Star” is a force. He’s sentimental without being corny and he makes the listener snuggle into his voice like a warm blanket. As much as this song starts out like a child’s song, it gravitates towards the folk genre. He takes you to the corners of the mind that feel safe, little spaces that sometimes don’t feel crowded. You’re left really only listening to him – with no distractions other than his modest guitar. He knits together little moments that become big moments. His voice melts in your heart and secures its faint among the many stars of past and present. Fans of Gordon Lightfoot, Jim Croce and Don McClean will surely like his temperament, and cling to his storytelling lyrics. While those artists mentioned capture a certain moment in time, a time capsule of Americana-folk-rock, Lord’s modest demeaner is certainly modern. His voice has no age, no time stamp, nor limits. Jim Lord’s “Little Star” is a clear, bright spot on this year’s musical map, and things keep looking up for Lord.

The music of JIM LORD has been heard all over the world in partnership with the radio plugging services offered by Musik and Film Radio Promotions Division.  Learn more https://musikandfilm.com