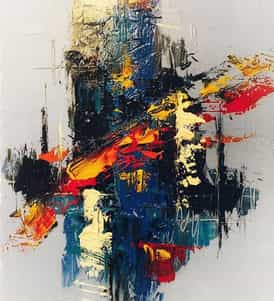 Armed with a chugging guitar riff and a slick rhythm straight out of the American pop/rock playbook, “Know What She Said” comes sliding out of the speakers as smoothly as a track can, emitting a sense of catharsis with every beat it unfurls. Les Nuby is pulling out the stops to make a big impression in this song, along with the nine others that join it in the new record Clouded, out everywhere smart indie rock is sold and streamed this July, and his efforts are more than enough to eclipse that of a lackluster mainstream market at the moment.

Clouded is loaded with a lot of instrumental ambitiousness, from the deluge of distorted decadence in “OK Let’s Try” to the reserved jazziness of “Standing Still” and elaborate neo-punker “The Shadowlands,” and there are some moments in which the music is even more of a communicator than the lyrics are. Overall, I like the experimental edge that the contrast between Nuby’s poetry and the compositional complexities of the music creates, as it definitely gives the finger to an obscenely straightforward pop/rock that has become the most dominant force in the commercial end of this genre.

Harmonies tends to be the most consistent centerpiece in this LP, often conveying emotion in tracks like “Say Love,” “Hey Ivey,”  “Come to Us” and “Never Falling Away” that wouldn’t be accessible to the audience otherwise. Through his relationship with the melodies in the aforementioned songs, Les Nuby is able to illustrate a lot of commentary not only about his own life but about the world around him in general, making “Never Falling Away” ache as much for me as it would some other listener in another part of the world. Multi-interpretive narratives aren’t as common in pop as they used to be, but that isn’t stopping this artist from exploiting their best qualities for everything they’re worth.

I definitely want to hear how Nuby plays “Fighting Sleep,” “Now It’s On” and “OK Let’s Try” in a live setting at some point, mainly because the possibilities are virtually endless when it comes to expanding on these tracks’ flexible structures. One of the most provocative elements in Clouded is how fluidly the material here feels, which indicates that all of these songs would probably sound all the more fascinating in their uncut state, as presented in a concert. Guitar-driven pop/rock is meant to be heard before a crowd, and this is especially true of albums like this one.

Les Nuby brings a lot of experience to the table with him in Clouded, and the results of his frequently-experimental efforts are quite pleasing for both the casual and serious fan alike in this fun new LP. The summer of 2020 has been offering us a lot of different flavors in pop, but not as much fretwork-powered grooving as some of us – myself included – would prefer, and that’s where this album gains its status as an exceptional release. It’s answering a call for more chest-beating melodicism while providing us with a great introduction to a new and improved Les Nuby.