Rolling With the Stones (single) by Wild Fire 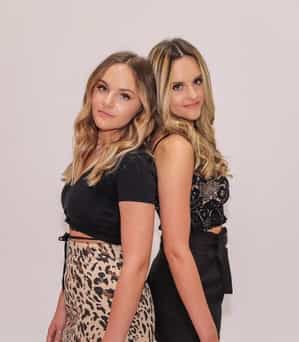 Rolling out of the speakers with an angelic ease that is indebted as much to Hollywood glam as it is the bucolic balladry of an old school Nashville, the vocal harmony in Wild Fire’s “Rolling With the Stones” is reason enough to pick up this new track from the acclaimed crossover duo this summer. Blending country with strong pop aesthetics and a talent for conjuring up powerful hooks out of nowhere, Wild Fire having been turning a lot of heads in the underground lately, and after taking a peek at this latest release bearing their moniker, I can definitely understand why.

You’ve got to love the natural chemistry between the two players in this duo, and even in a cursory listening session I think it’s pretty obvious that they have a familial bond. Wild Fire are actually sisters, and when they sing together, there’s an unfiltered kinship in the ensuing harmony that tends to add a warmth to any verse they’re conveying unto us. There’s a lot of passion in their volley, and even at their most compelling, there’s rarely a moment in which they sound like they’re competing for our attention. They’re playing off of each other’s cues marvelously, and never showing even the slightest hesitation in their overall execution.

The percussion in “Rolling With the Stones” cushions the lyrical delivery perfectly, and to some extent, I think it lends a certain amount of license to the narrative that simply wouldn’t be here otherwise. By utilizing non-melodic components to reinforce the emotional core of the track, Wild Fire are making it awfully hard for us to experience the substance of their songcraft – the glistening harmonies – without feeling some sort of a reaction to the music. It’s provocative and pop-centric, and yet not the only example of their adeptness in the studio.

This master mix isn’t as tightest that I’ve listened to all season, but I totally get Wild Fire’s desire to avoid an overproduced sound in this latest single. There’s nothing worse than taking a solidly melodic product and varnishing it with a lot of unnecessary sonic plastic, and in choosing to keep the elements comprising the backdrop here wholly organic, these two are able to give us the best – and most honest – version of “Rolling With the Stones” possible. That’s more respectable than what some of their pop contemporaries have been producing in recent months (to say the least).

If you like country/pop crossovers as much as I do, Wild Fire’s new single “Rolling With the Stones” and its companion video are definitely worth checking out this July. Fresh out of the Lone Star State, Wild Fire are representing the Texas underground with pride in this track, and despite the fact that they’ve got quite few worthy competitors coming at them from all sides of the game at the moment, they’re showing off the kind of chops it’ll take to elevate their sound from the indie circuit into the limelight of the mainstream once and for all.