Singer/Songwriter Daniel Tortoledo’s Through out These Years LP 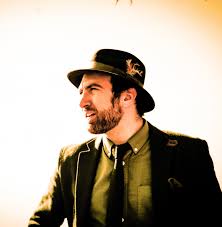 An essential agent of evocation in most any pop/rock effort, there’s no understating what a quality guitar part can contribute to an album as homespun as Daniel Tortoledo’s Through out These Years, and in songs like “Give Me Soul” or “Eloise,” it’s as important as any lyric ever could be. There aren’t a lot of cosmetic frills in Through out These Years, nor are there any attempts on the part of singer/songwriter Daniel Tortoledo to sound any more larger than life than his natural melodicism would already allow for. These are straight harmonies made for the curious alternative folk fan, and they’re arriving at a near-perfect moment in history.

The strings aren’t the only flash point of provocative substance to be found on Through out These Years; truth be told, there are a surprising amount of alluring beats here. “You Can Have It All” and “Bottle of Wine” are particularly stirring on the percussive front, while “Not Too Late” and “You Can’t Have It All” employ every melodic element on hand in a push to create muscularity in the groove. It’s clear that when Daniel Tortoledo set out to create this record, he wasn’t leaving anything to chance – after all, there wouldn’t be this level of detail present if that weren’t the case.

There’s definitely a heavy folk aesthetic found in every track included in Through out These Years, but there’s also just as much of a rock n’ roll influence worth writing home about. The music video for star single “Dark Times (Brothers and Sisters)” is weighted with an attitude that is downright rebellious visually, and when coupled with its soundtrack, it feels like a tribute to the crossover rock of a bygone generation of colorful crooners – many of whom have a legacy within Tortoledo’s sound.

I would’ve preferred “Eloise” and the title cut conclude this album over “Spare Time” and “Give Me Soul,” but other than that, there isn’t one thing that I would alter about the arrangement of this tracklist. There’s a ton of tension swelling as we near the finish line in Through out These Years, and although I would have manipulated it a little differently than our leading man chose to, there’s no disputing the fact that he manages to deliver a very aurally-gripping effort here just the same. There’s a method to his madness, and as cryptic as it might appear in this record, it’s accomplishing something beautiful regardless.

After getting into the nine songs included in Through out These Years over the last week or so, I can definitely say that I’m looking forward to hearing more out of Mr. Daniel Tortoledo in the future. This is a fantastic rookie effort that has all the trappings of being a mood-setter for his upcoming releases, and although he’s entering the circuit at a time when competition has inarguably never been quite so fierce, the chops that he demonstrates in this LP should be more than strong enough to secure him an audience all his own.