Live from Lockdown, the Streaking in Tongues’ 2020 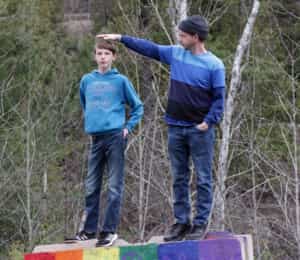 Live records present us with a different dimension of an artist, and in some cases, a level of appreciation for their craft that wouldn’t have been possible in a more typical setting. In Live from Lockdown, the Streaking in Tongues’ 2020 installment in their growing discography or pure indie gems, the father-son pairing give us access to some of their most revered compositions through a dynamic real-time performance that binds all of their most eclectic elements together in a singular strand of sonic ribbonry. This isn’t the rough-cut Streaking in Tongues that released Kindergarten Prayers two years ago; in my view, this is a rather refined and conservative look at their music, and one that longtime experimental folk enthusiasts will not want to miss out on this summer.

The production quality here is ironically a little more polished than I was expecting it to be, and in tracks like the droning “See Me See Me,” “Kindergarten Prayer #3,” and “When It Comes to Dreaming,” the melodies are almost slickly applied to the rusty-rhymed poetry. The resulting contrast is utterly breathtaking in certain instances – namely “Little Big Questions” and “Young Again” – and scarcely fails to keep us gripping the edge of our seats waiting to feel the full scope of the harmonies as they come wafting out of the speakers and into the air around us. Streaking in Tongues are known for low-fidelity sonic lust, and thus, this type of a venture is unlike anything I thought it would be – in a very good way.

“I Was a Fool Before You Were Born,” “Farewell OCD (You Pesky Bastard)” and “Boy in a Garbage Bag” have an aesthetical edge to their presentation in Live from Lockdown that simply wasn’t present the first time around, and I think this very edge contributes an additional layer to each track’s narrative. In essence, Streaking in Tongues aren’t burning through a collection of favorite tracks from the back catalogue so much as they’re revisiting concepts of old with a new frame of mind and, more importantly, a new approach to their angular designs. This makes almost every track here quite multi-interpretive, and that’s not exactly something that I’ve been able to say about many of the mainstream records I’ve reviewed in the year 2020.

Streaking in Tongues’ stellar campaign continues to be among the most provocative in the American underground today, and if you’re curious to know what all of the fuss from critics has been about, you’d do quite well to take a peek at the unforgettable tracklist in Live from Lockdown a lot sooner than later. In all thirteen of the songs here, from the grizzly “Field of Pineapples” to innocently electropunk “Kindergarten Daze,” there’s never a moment in which these two players sound anything but genuine and heartfelt in every harmony they produce, and while I already knew they were capable of great things prior to sitting down with this latest LP, Live from Lockdown only confirms everything I’d already believed about their brand.