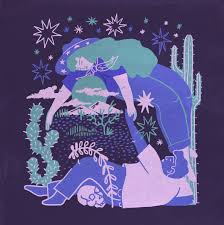 Jake Winstrom initially built his name fronting and writing songs for the band Tenderhooks but his second solo album, Circles, brings a higher level of ambition to bear. There are pop inclinations rife throughout the album’s nine songs, even the more guitar-dominated tracks, outside the box instrumentations adorns some, and an engaging poetic twist further strengthening each song’s character. Circles is rich with idiosyncratic yet revealing turns of phrases, jolting imagery, and a sense of personal stake underpinning each lyric. There is a dry underplayed sense of humor as well in the work. Winstrom invests a great deal of artistic capital into making these songs pay off for himself, first and foremost, bringing willing listeners along for the ride. His singing voice may not be everyone’s cup of tea, to borrow a well worn cliché, but it nonetheless is an expressive instrument ideally suited to these tracks.

“Come to Texas She Said” opens the album with snap. There is a bit of near-boogie percolating underneath the surface of this track and Winstrom tackles the lyric with a fitting amount of verve. Winstrom obviously understands the importance of an attention-grabbing opener for an album and there isn’t another song included with this release hitting with the same impact for that all-important spot. “My Hiding Place” has a brooding heart and the elegiac mood of the arrangement provides an excellent counterpoint for Winstrom’s vocal. Nick Morgan punctuates the track quite well with his guitar solo and producer/drummer Jeff Bills keeps the pacing on point throughout the entirety of the song showing no inclination to meander off beat. It is a studio recording, obviously, but there’s little doubt this cut can work on stage with equal efficiency.

The romantic fatalism powering “What’s the Over Under?” provides a potent forum for Winstrom to exploit his expressive pipes. This is a relationship teetering on the brink, at least in the mind of the song’s narrator, and the use of a gambling metaphor for predicting its future trajectory helps it connect with listeners. Some might hear strong country influences running through the track “Loose Change” while others will peg the track as folk-rock inspired, but it’s another high point on the release. The relationship teetering on the edge in “What’s the Over Under?” is broken here and the narrator is assessing the wreckage. It’s another ideal track for Winstrom’s vocal style and the musicianship is top-flight.

The electric guitar playing on the finale “Kilimanjaro” will recall the sort of ragged glory conjured by Neil Young and Crazy Horse, but it’s never imitative. The lyrics are sharp and often unexpected – there’s none of the sense of predictability you might find in lesser artists. It ends the nine-song release on a dramatic and never heavy-handed manner. Jake Winstrom’s second solo album Circles is deceptively ambitious and his success pushing the artistic envelope at this point in his career reveals Winstrom in this for the long haul and not content to coast on past glories. For longtime fans, it’s an affirmation. For newcomers, it invites you to follow him from here.