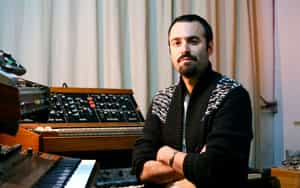 If there’s one thing FrankySelector isn’t interested in right now, it’s contemporary synthetics as they apply to a hook, and if this wasn’t known to the world before, it will be once “She’s so Carefree” finds regular rotation somewhere on the dial this September. Celebrating the foundations of funk and pop music while planting its stylistic feet firmly in the experimental camp, “She’s so Carefree” is probably one of the more beat-focused tracks of its kind to come across my desk in 2020, but truthfully, it’s also one of the most melodically addictive from top to bottom.

Lyrics aren’t utilized as the main point of expression in this single so much as the tone of FrankySelector’s vocal and, more specifically, how it reflects off of the bassline. The groove that starts and ends with the cadence of his verse, the drums and the bass part is almost solely responsible for gorging the mood behind the lyricism in “She’s so Carefree,” and although the words have enough substance to stand up with the high caliber musicianship here, they could never eclipse the instrumental thrust in terms of communicativeness. That’s entirely by design on the part of the artist and his cohorts, and if it’s not, it’s nonetheless a look they wear really well.

The music video for “She’s so Carefree” is rather grainy but quite complementary to the vinyl-quality beats in the background, producing a cerebral finished product that could appeal to indie stoner pop fans as much as it would the college R&B/funk revival crowd (which, despite their similar interests, are two audiences that don’t usually reach for the same records). It might not have been made to resemble the mainstream model, but once again, that’s what wins most of FrankySelector’s fans over at the end of the day.

There isn’t any pretentiousness in the players here, and whether it’s the drummer, the sax player or FrankySelector himself, it feels the chemistry between them is entirely natural and not being produced using the technology afforded by a professional recording studio. You can’t fake the kind of gelling that’s required to break off a beat as seductive as the one we find lurking around the shadows in this track is; if you’re lucky, you’re able to capture it at its most unrefined and raw inside of a jam session long enough to cut a single as sexy as this hot new offering is.

If “She’s so Carefree” is just a preview of what the future has in store for the Montreal-based FrankySelector and his growing discography, it would be safe to say that we can expect to see his profile expand exponentially on the southern side of the United States-Canada border in the next year or two. He’s got all the right chops to turn on listeners of all backgrounds, and when taking into account the increasingly fashionable status of alternative soul and neo-funk around the world, material like

“She’s so Carefree” could go a long way towards establishing his as a reliable moniker in the game.