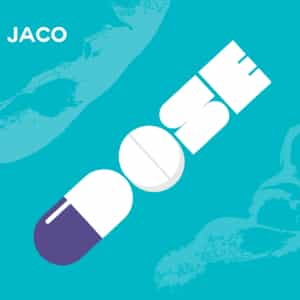 Jaco takes you on a joyride through time and space on the new album – Dose, with ten strong power pop tracks with just the right weight level to keep a positive light shining in 2020.  The songs are light and fluffy but rocking and twangy, with Jake Waitzman being the man behind the moniker on the second Jaco album.  A man of many means he turns out to be, as the former drummer of Whales and Wes McDonald in Birmingham, and other things as well.  The Dose album is a hot to trot release that puts Jaco on the map for fans like myself.

“Outer Space” says it all, it really opens the album off right by making it at a pace worth getting into instead of deciding right away it’s only going to rock and not have any subtle nuances that pick up later.  This is the right choice, as well as following the opening track with the likes of “Weigh You” hitting a little harder and making it easier to get into that way.  I was taken back to the 80s, back to when the voices started changing and things started getting more romantic in the music scene.

The third track, “Fabergé” is even more reminiscent of that 80s sound, when bands like The Psychedelic Furs ruled the airwaves and you could rock without having to bang you head.  Just plain good ol’ rock with an album punk edge but a lot better musicianship serving the songs.  This is probably the most shining point on an album where that is very-hard to nail but worth a shot, as it seems to please me the most.  “Bluebird” might content with it and anything else to be found on Dose but leaving up to a nice bird call always helps.

“Sign Of A Struggle” is the one of the hardest hitters on Dose, with what is just a more serious than playful number about getting beyond the point of struggle and moving on.  I love the ups and downs this track go though to get to the destination of it all, so it is a stand-out track.  “Missing Man” is another stand out track and could be the sleeper of the whole bunch, to really pin-point the finer places.  One thing is for sure, it’s how I see it this album.

SMART URL: http://smarturl.it/Dose
“In The Sea” is yet another song to write home about and stick it in a bottle and toss it out and see who receives it.  This song is so good it even mentions things like favorite songs, it instantly locks into your head and keeps you there for the whole five minutes and twenty five seconds of purse excellence.  The rest is gravy as “Somebody Told Me” comes bursting out of the speakers, and “Things In A Dream” thrill you for another highlight with two more groovy earworms before the album closes with the marvelous “Grow Up Together” which brings the ride to an end.  More where this came from is all there is left to say.