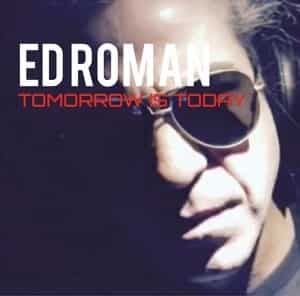 Proving he still has the pulse of the working class close to his heart, and the rock rhythms even closer, Ed Roman delivers yet another strong outing in his “Tomorrow Is Today”. A follow-up to his previous 2020 single, “Stronger”, “Tomorrow Is Today” is from Roman’s anticipated album, A Recipe For Perpetual Spring (produced by Roman and Michael Jack). A one-time Billboard Emerging Artist and Josie Show Award Winner, Roman continues to knock out songs that get the heart beating just a little faster, at the same time, stir our very soul.

Ripping that cord in the first few moments of “Tomorrow Is Today”, Roman’s flow includes audacious bass guitar rhythms most classic rock bands would drool to mimic. He also combines that funky vibe with what sounds like a synthesizer – but could also be an electronic keyboard. I think it might be both, but when I close my eyes and visualize Roman in that recording studio laying down this track all I see is this rock star / mad scientist in his laboratory making all of the gadgets and thing a-ma-bobs turning and burning.

I haven’t even mentioned his vocals yet. When Roman sings yesterday’s gone, tomorrow is today, in his Bob Dylan-esque philosophical candor, he has much more harmony than Dylan. I’ll admit, it took me a few listens to really place what I liked most about Roman’s voice. I discovered what I like most about Roman’s voice is that he really doesn’t sound like anyone else. He’s not boastful. He’s not old-sounding. He doesn’t wine or appear so incoherent you can’t understand what he’s saying. He’s his own speaker box and the chatter coming from him is pure rock and roll. The more you listen to him, the more Roman’s voice melts like butter. Not in a crooner way, but in the way that he really becomes one with the backing music.

The song’s bridge and second half changes up the tone just a bit. I felt like it elevated the song, and brought on a wave of happiness. I loved the way he has this ‘hand clap’ arrangement. It makes the song feel communal or global. The message, I believe, in this song is that one must live for today and tomorrow is not promised. At the same time, we should encourage our fellow humans to really care for each other and encourage each other to be their best. A little sappy, yeah, but it works. Roman’s secret weapon, besides his chameleon voice, is the bass guitar and it’s drippy tones. It gives the song a unique sheen. I think long time Roman fans will not be disappointed, and furthermore, I think they will be impressed at the way Roman continues to grow and evolve his rich sound. He still sounds like the guy that came onto the scene with “Muckin Around” and “So I Breathe” (both from the 22-song odyssey Oracles & Ice Cream (2011), but Roman’s greatest artistic strength is that he’s best when he’s just being himself: a troubadour of truths.