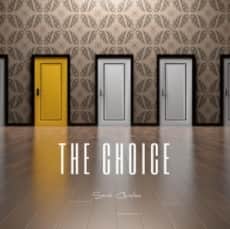 Sarah Christine’s new single The Choice is an eclectic blend of styles and approaches, a bouncy sort of effort that takes on 1990s dance, alternative rock, pop, and even even a bit of R&B before the song ends. The glue that unites these distinct approaches is Sarah’s charismatic voice. Where she is able to tell a story in a way to get toes tapping, there’s a great deal more nuance to the voice that necessitates additional plays. At any point during The Choice, listeners can choose to focus on any one of multiple twists, turns, and dynamics. Beyond increasing the single’s replay value, the result of this density is that no two seconds of Sarah Christine’s song sound alike. Where the track concludes at the three and a half minute mark, the execution of all points of the track is so proficient that the effort will bounce around fans’ brains for hours afterwards.

Part of the reason that The Choice is such a bona fide hit has to be the luxurious production that envelops the instrumentation. This means that each note is easily able to shine on its own merit, but is simultaneously able to be taken up alongside the rest of the composition. Sarah Christine has created a work in The Choice that could easily garner airplay on numerous radio stations and Spotify playlists, but provides a deep and engrossing effort for those that want something a bit more intricate with what they listen to.

The Choice shows a solid evolution from Sarah Christine’s 2018 work, Breaking Silence. Give the track a spin at any DSP and let us know what you think. We’ll be keeping the song on our in-house rotation for the foreseeable future.