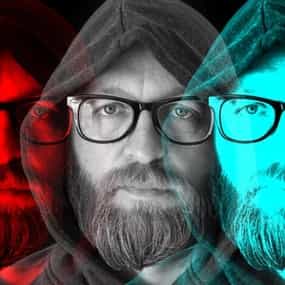 Southern United States based Davy Williamson’s first solo single “Thin Disguise” from his debut EP release is the sort of track you want to have building a first impression for your solo career. Williamson makes great use of hard rock as a vehicle for his songwriting and manages invoking its strengths while still making a personal statement. He does it without any flash or unnecessary gloss. Williamson isn’t the sort of performer who relies on an appealing surface to sell his music. “Thin Disguise” is drawn from life’s fraught possibilities but Williamson writes in such a way that it isn’t difficult for anyone with life experience to connect with.

You connect with the emotion in his voice as well. Williamson couples enough grit and emotional skill together in his vocals, but his voice is far from classic. He, nevertheless, has an effective presence, has a level of consistency recalling much older performers, and conveys the intense feeling underlying the material. It seems to be drawn from Williamson’s personal experience, but it is not necessary for that to be true – he definitely inhabits each line like a human being who has lived every syllable.

It is an ideal length for songs of this style. He does not go for a completely straight-forward approach, he shuffles the customary structure a little in this song to give listeners an interesting variation on a familiar theme. Williamson will earn a lot of fans thanks to his aversion for wasting listener’s time but it is likewise a reflection of his artistic aesthetic. This is a songwriter interested in crafting straight-forward rock tracks nonetheless demonstrating a significant degree of sophistication and intelligence. It is hard to say he isn’t successful. “Thin Disguise” can impress you with a single listen.

It will make a good impression during live shows and it’s not hard imagining Williamson featuring this in his concert set for some time to come. The track’s many components are geared towards a single end – impressing the song’s emotion and message on willing listeners. The rhythm section accompanying the guitar is every bit as accomplished and gives the track a propulsive thrust that drags listeners along from the outset.

“Thin Disguise” is likely the first taste of an equally good EP release. These shorter collections are more popular these days than ever before and the to-the-point demeanor of Williamson’s music is well-suited for the form. Give it some time and we’ll hear an album from this young songwriter and performer. There is definitely a sense of possibility you don’t often encounter rife over the course of this song and Davy Williamson’s work will impress young and old alike.