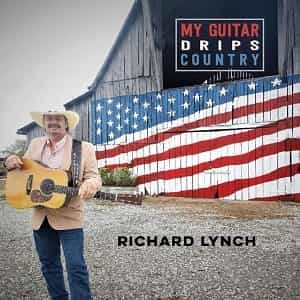 Decade spanning country superstar Richard Lynch returns with the winning, affable My Guitar Drips Country. Starting with the effective tone setting “Starting Now”, Lynch makes it clear, he’s about love and togetherness, and while it comes with a decidedly religious tint that might not be for everyone, his message is undeniably altruistic and should be heard.

With that song it recounts a man who’s turned over a new leaf after years of vice thanks to the lord and purpose, and one can’t help this may have been inspired by Lynch’s co-founding of Love Tattoo Foundation with assist in veterans aide, and as many know the aftercare those formerly in the service get is often less than desirable, and I can easily imagine Lynch crafting this song out of personal experiences while also offering his own advice of how to carve a happier way forward. Lynch is certainly a positive guy in his life and his craft, as with the lighthearted family diddy “Grandpappy” which sees him fondly looking back at a pivotal patriarch in his life. The importance of family is clear both there and on the track “Cathead Biscuits” which is a nostalgic look back on the cooking of his mother, and I warn you to not listen to it on an empty stomach as the imagery Lynch can conjure lyrically is often palpable. That song also takes new meaning after hearing the penultimate “Wait for Me” which is a fitting, beautiful goodbye to a loved one.

Lynch’s clearly evocative word choices are here to make us feel appreciative of what we’ve got around us, and even when he’s being what you could call a hopeless romantic such as on the track “My Heart and Yours,” a charming duet with Katelyne Adams which sees the two vocalizing (no pun intended) their hope and joy for maybe meeting the one, but the song is also vulnerable for us to hear their inner workings and the doubts, fears, and insecurities that come with love.

While I said earlier the more overt religious aspects may be off-putting to some, Lynch truly repurposes his life experiences and makes something universal that many a seasoned country fans will enjoy, and I suspect a few of these tracks might convert a novice, such as “Place I Have Never Been” which is a song literally aimed at said novices. In that song, Lynch has a heart to heart dialogue with those who don’t believe they’ve lived a “country life” so how will they be able to connect with the music? Lynch’s answer is simple, open your heart and it’s not all just dirt roads and the now very tired cliches. Country is ultimately and has always been about storytelling and capturing the human experiences of joy and heartache, and this album is a perfect example of those ideals. The texture of these songs are rich, despite sometimes being a little basic in their arrangements. Regardless, this is a fantastic hopeful crowd pleasing way to begin 2021, hopefully with the togetherness Lynch wants to inspire.