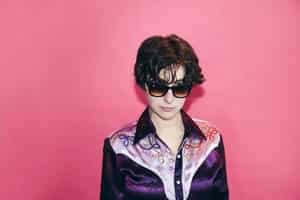 Sophomore albums can be ever tougher than virgin efforts are, but you’d never guess as much from taking a peek at the seamlessness of Bobby Dove’s Hopeless Romantic. Although created with much of the same stylish color their first record was, Dove’s follow-up to Thunderchild is a lot more personal, and you needn’t look much further than the LP’s title cut and lead music video to understand what I mean. They’re a singer/songwriter that doesn’t have time for platitudes and familiar metaphorical verses, and to me that makes them quite the interesting find this month for sure.

The music video for Hopeless Romantic’s first single is quite charming and warm, particularly because of its cut and dry stylization. “My World’s Getting Smaller,” “Like It or Not I Love You,” “New Endings New Beginnings” and “Haunted Hotel” likely would do just as well on the radio as this track will in and outside of Dove’s native Canada, and truthfully I wasn’t able to flesh out any filler in this latest studio offering. There’s too much story to be told for there to be an onslaught of commercially-focused frills, and that’s evident from “Sometime It’s a Lonely Road” to “Golden Years” and back.

The only real issue I had with Hopeless Romantic was its lack of cohesion with regards to a big picture. From one track to the next, it sometimes feels like we’re listening to scattered thoughts from throughout a diary rather than pieces of one specific, meaningful entry, and this certainly diminishes the bigness of “Chance in Hell,” “Gas Station Blues” and “El Hormiguero” a lot more than necessary. I’m not at all suggesting they go straight progressive with the concept, but Dove would be smart to put a little more time into creating a sense of material fluidity in their next widely-released LP, if for no other reason than to make the mood consistent from one end to the other.

Bobby Dove still has a lot of potential that needs to be tapped into, and that’s made quite obvious to listeners even in the few weak moments Hopeless Romantic includes. All in all, this is a really vulnerable album that speaks volumes about who its star is becoming with age and miles under their professional belt, and if it’s a sneak preview of what’s still to come for Dove’s discography overall, this won’t be the last time they’re making headlines around the globe.