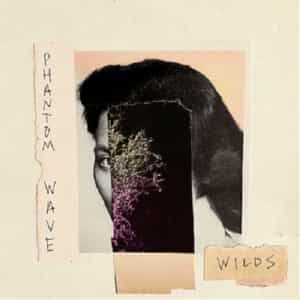 Anyone can be loud and proud about it. If you’ve got the right stack of amplifiers and a sense of adventure, you can produce sounds as big as mountains whilst utilizing the natural ambience to get people’s attention from a great distance, but to manipulate raw tonal energy into something that feels emotional and tangible to the average person – as Phantom Wave do in their new album Wilds – takes a special talent indeed. Phantom Wave whip this talent out like it’s second nature in their debut LP, with tracks like “Anterograde,” “Resin,” “Glower” and “Sweet Cheera” endearing their sound to the gods of noise, all of whom can be credited for the ongoing growth of surreal pop and rock music as both genres stand today.

Phantom Wave’s smashing expressiveness in the studio isn’t limited to the bands of melodic texture and lyrics that adorn them in Wilds; instead, we find it spilling into the rhythm of “Recursive,” the compositional foundations of “Depth Charge” and “Everglades,” as well as the production style of songs like “High Dive,” “Billows” and the unforgettable “Valhalla.” Interplay between the musicians comprising this act is essential to feeling the simmer of the passion they share – after all, what good is solid material without chemistry between the players actually charged with performing it? The very thought of one-dimensionality was never allowed into this fold, and I don’t think you have to be some kind of professional critic (or even a hardcore alt-rocker) to detect as much in this LP.

Everything in Wilds is pretty melodic, and that includes the tracks in which chaos lies at the core of the music. “Billows” and “Resin” didn’t have to feel like the one-two punch tribute to Sonic Youth’s salad days that they do, but their retro aesthetics actually make the tracklist here a lot more fluid. The flow of the material is a big part of the reason why I think this record is so difficult to step away from, which is quite different from what I might just as soon say about the mainstream pop/rock set to come out this summer. The indie ethics of a bygone era are alive and well in this disc, and they’re benefiting the musicians and their listeners substantially.

I know this is only the first album we’ve heard from Phantom Wave since their formation, but I’m already really looking forward to hearing what they can come up with in the studio for their sophomore LP. Wilds has so many different angles from which we can interpret the bigger story being told here, and although I’m not sure whether or not Phantom Wave care about the politics of contemporary rock n’ roll, I believe there’s a good chance that a sound like theirs could do a lot to shake up the American underground in one of the best possible ways this spring. Every scene could use a refresher now and again, and in this sense, these players have selected the right moment to come forth.