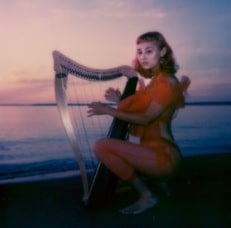 One of the most compelling and notable singles released this past month, “Cherry Pit” stands as the pinnacle of Los Angeles-based artist Luna Li’s skyrocketing career. A native of Toronto, Li grew up in a musical environment and, at an early age, began studying classical music and hanging around a tight-knit community of musicians who attended her mother’s partner’s music school. After graduating high school, she attended McGill University in Montreal, where she studied the violin, but eventually dropped out to pursue a less formal musical career. Quickly becoming a fixture in the Toronto indie scene, Li first became acquainted with the spotlight through social media, after videos showing her performing her unique and sophisticated brand of lo-fi pop-rock from her bedroom studio garnered thousands of fans and followers across Tik Tok and Instagram.

Following the release of a ten-song EP simply titled Jams back in February, Li released her latest single, “Cherry Pit,” on March 8th through LA label In Real Life Music. A lusciously orchestrated four-minute invitation to revel in the overarching oneness that defines all things, “Cherry Pit” marks the next step in Li’s already advanced and mature songwriting style. Irresistibly smooth and undeniably soothing, the song deftly combines world-music production elements with the sultry sounds of post-disco-infused pop and hints of jazz fusion. The result is a multi-layered indie-pop track whose musical substance is perfectly matched by the cool ethos it espouses, as it makes use of polished and sophisticated harmonies while showcasing Li’s talents as a multi-instrumentalist. (In addition to vocals, she also plays guitar, bass, drums, keyboards, and the harp).

So far, the single’s overnight success has allowed Li to reach nearly half a million monthly listeners on Spotify, as it simultaneously landed her public support from such industry insiders as producer Ariel Rechtshaid and indie-pop powerhouse Clairo. Due to the song’s success across all major digital platforms, she was recently invited to perform on the Asia Rising Forever Livestream, a live Twitter performance that received a whopping 7.5 million views and featured internationally-renowned acts that included England’s Beabadoobee and Indonesian rapper Rich Brian.

As festivals and venues across the country begin preparing for the possibility of a world beyond the current pandemic, it will be interesting to see how this young and rising artist translates her social media success into the realm of in-person live performance. Today, however, one thing seems clear: Equally impressive and impeccable, “Cherry Pit” is more than just a tastefully written and infectious example of progressive, lo-fi pop in the Zoomer era. It also unquestionably marks a before and an after in a career with a foreseeably durable shelf life.