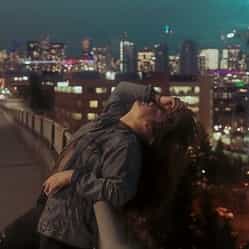 You can hear many of Melanie Rogers’ influences in her new self-penned single “Fever”. She often cites artists as diverse as Vera Blue, Welsh singer/songwriter Novo Amor, Joy Williams, and Enya, among others, as crucial older performers who cast a long shadow over her own work, but the special thing about her is how she transmutes their influence into something individualistic and unique. You would never claim she is imitative. The sound of the single, as well, stands out. She benefits from near-perfect production that accents her multiple strengths and it renders the track’s instrumental components with startling clarity. She is far removed from her beginnings in the music world, singing Christian-centric material, but sounds completely at home with this new single.

She infuses the song with light theatrical energy. Her singing or phrasing is never ostentatious, but she works hard to fill each of its lines, especially the chorus, with an acute sense of dramatics. It is notable, as well, that she navigates the melody with such dexterous confidence. Rogers moves from line to line with unflappable skill and dials up her intensity during the chorus without overplaying the moment. You can’t help but be impressed after a single listen and further only underlines her commanding gifts.

It isn’t difficult to hear why she was a spotlighted performer in Contemporary Christian music. There’s an exhortative quality in her singing that springs to life during the chorus. She definitely communicates her experiences with a romantic relationship rushed in the heat of the moment and doomed to flame out. It is clear she’s learned a lot from that period in her life and the process of writing, recording, and releasing that song is part of the process for her.

The three central musical strands woven into the track are drums, guitar, and synthesizer. The first two of that trio are most prominent, though certain passages ramp up the intensity of its electronic touches. It’s a testament to the sturdiness of her songwriting and the relative simplicity of its approach is still such a success. Rogers, both as a songwriter and vocalist, understands how to connect with her audience without taking shortcuts or bluffing her way through the performance.

Her unabashed willingness to share her vulnerabilities with the world is one of the virtues setting some artists a cut above others. This isn’t some distanced or cliché ridden litany of romantic anguish – instead, she shows the ability to transform the pages of her life into something virtually any listener will relate with. “Fever” stands out, as well, for its stylishness – there will be a little question for anyone listening that her time in the Contemporary Christian music world stifled her creativity in some ways.

There’s no more of that, however. The new single finds her musical imagination in full flight thanks to a stellar cast of collaborators, but it is her talent, in the end, supplying the transformative spark that realizes its full potential. It is certain Melanie Rogers is destined for continued success. She bears her heart with this single but it proves hard work and discipline will bring her great rewards as well. The emphatic effort she puts into making this a memorable release illustrates that.