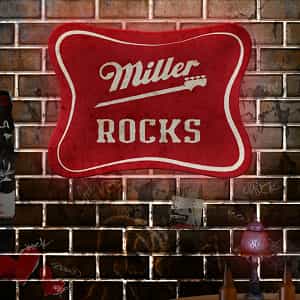 Talking Heads frontman David Byrne once wrote a very controversial essay regarding the abolishment of the term “world music”, finding it reductive and disrespectful to basic artistry of hard-working musicians around the globe that should be boxed in due to the nationalization ideals of American music. I’ve always been inclined to agree with him because, well he’s David Byrne and there have been plenty of excellent musicians who’ve wanted to highlight the best aspects of genre all without needing to wrap it under the bow of “world music” and Robert Miller and his new album Miller Rocks is another addition to that pantheon who wants to break down walls and the rules of what music can be.

Deceptively sold almost as a standard rock record with your fair share of titles like “My Baby”. “Right Now”, and “You’re My Friend”, when you actually listen to the record, what you get is something widely unexpected. In many ways it’s hard to describe until you listen to it, so let me be incredibly straightforward by saying LISTEN TO THIS ALBUM RIGHT NOW. It’s one of the best records of the year so far from an indie label and from an artist and a mind with one of the purest loves of music, having produced and worked on so many projects with his various brand “Project Grand Slam” and what an apt name that is because this album is a slam dunk (I’m sorry it was right there). Miller has always been a modernist with an ear towards the unexpected. being able to combine influences and sounds from the likes of Mexico, Cuba, Puerto Rico, and Canada thanks to the involvement of the many collaborators he’s shared over the years. This album is more on the Americana kind of jazz, soul, and even funk and country variety, but it also feels distinct, like the kind of record that trying to put into a quantifiable box would do it a disservice.

The guitars sing with an aplomb thanks to the work of Tristan Clark who really shines on tracks like Labor Day and Fires All Your Rockets which combines the strings with the sounds of the organ which almost has this quality to artists like Donovan and other kinds of psychedelic rock. I think it’s a bit of a shame that sometimes Miller pushes his vocals a little back in the mixing because he has a great voice, but it’s certainly a stylistic choice on something like “1000 Days”. It’s really hard to find a lot to complain about an album that exceeds just being called competent. It’s a labor of love and also a great gateway for burgeoning music fans to expand their pallet and find ways to learn and enjoy music out of the safe boxes that a lot of modern pop and rock tends to push onto the current generations. Miller has had albums hit number one on the Billboard charts and it’s easy to understand why. The man is a legend in the making.