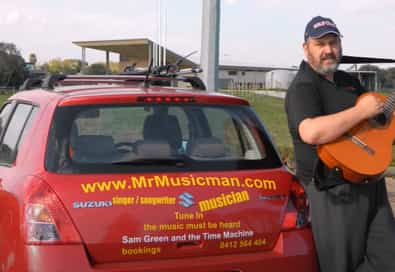 Few songwriters embrace a sense of place like Sam Green. Green and the Time Machine are responsible for reeling off a series of outstanding full-length collections between 2013 and 2018 and several songs over that timeframe reflect the strong connection he maintains with his homeland Australia. He invokes that love without irony or, tellingly, rose-colored glasses, but there’s ample affection as well.

Few songwriters, likewise, demonstrates such an overt empathy for the natural world. His track “For the Ocean” from the 2013 release I Think It’s About That Time has a simmering level of energy Green keeps going throughout. It’s generated, for the most part, by the acoustic guitar, but Green’s singing contains a great deal of drive as well. An earlier release from that same year, Players All Are We, has a handful of Green and the Time Machine’s most poplar tracks. “Have the Seasons Changed?” is as unadorned as music recordings get. The track is an acapella performance with lyrics that examine the passage of time, natch, and our bemused response to the years rolling on. His vocal captures the underlying emotions with minimal studio effects.

Another track from Players All Are We that has earned the approval of Green’s fans is “Your Heart is a Diamond”. The arrangement is more evolved than other songs in a similar vein and the stylistic touches are colorful while suitably restrained. It has an unwavering march tempo but never threatens to bore listeners. His later work is just as potent. One of 2017’s releases, Which Way Left?, included two of Green’s most impassioned tracks about his native land. “I Want to Live in Australia” is the first of these tracks. It’s an intimate performance powered by violin, acoustic guitar, and Green’s voice. The first of these two elements work in close quarters throughout the track, the violin supplying the song’s top line melody, but the guitar provides its foundation.

A later track on the recording, “Melbourne Town”, essentially follows the same musical template. His lyrics are much more expansive than the earlier track’s reliance on repetition but Green resists biting off more than he can chew. Both tracks are free from any kind of coy sleight of hand or sentimentality, but they express straight-forward emotions with palpable sensitivity. “Sperm Whale” from 2017’s fourteen song outing Love, Love, Love is another of Green’s more popular tracks. It shares a common spirit with the earlier cut “For the Ocean”, but this song takes on a much more direct form of address than I Think It’s About That Time’s gem.

Another popular song from the release, “I Am Who Justi Be”, has an endearing yet forceful simplicity thanks to both its lyrics and presentation. His vocal, however, is the highlight as he ingratiates himself with listeners from the first line onward. He isn’t just a traditional folkie, however, as “I Carry the Load” from 2018’s Ten Parts of the Journey illustrates. It echoes classic country, particularly in its use of pedal steel guitar, but its easy amble hails from south of the Mason/Dixon line. He sounds as convincing as ever, however. You never listen to any of Sam Green’s work doubting his sincerity. Having such music available via Spotify is a blessing you should avail yourself of today.