The Brian Shapiro Band’s debut collection All That We See 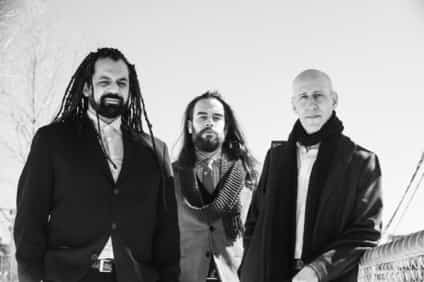 The Brian Shapiro Band’s debut collection All That We See is one of the most individual music releases I’ve heard in a long time. The eight tracks including a bonus cut included are unique even in 2021 as the three-piece mashes up a soup of musical styles. “Three Things”, the first track, is impossible to describe. It is a jump blues, a punk-inspired romp, and even has singer/songwriter aspects that Shapiro steers through an eventful two and a half minutes. It never races along in neck-break fashion, but the track generates an appreciable amount of energy as it flashes by listeners. Its tempo shifts on a dime, the physical guitar playing, and Ben Kutner-Duff’s drumming will easily capture listeners’ attention with the opening track.

“We’ll Take Them All” opens in a deliberate way before transforming into a light jazzy vamp. Shapiro and his bandmates Kutner-Duff and bassist/organist/guitarist Ed Moman conjure an impressively full sound despite being a trio and possess audible chemistry each time out. Other players make their presence felt on these songs, however, and this is no exception. Nick Panasevich’s keyboards provide important color for this track. The glimmering beauty of Erica Zimmer’s voice provides a memorable contrast with Shapiro’s voice teaming on the third track “What’s Real”. It has a much more languid pace than the opening duo and a dreamy gait that lulls listeners with its near-hypnotic roll.

Steve Davit contributed important sax lines on the album opener and returns for the later track “One More Time”. The songwriting returns to the same abbreviated structure of the earlier cuts and Davit’s chops are more than enough for supplying “One More Time” with a vivid exclamation point. It has a chaotic feel, but it’s a skillful and effective mirage. “Thin Skin” will be a favorite for many and it is easy to hear why. It’s eminently relatable, particularly its potent and straight-forward chorus, and Shapiro senses that. He is emphatic during the song’s peak moments without ever sounding ham-fisted.

Shapiro’s love for brass continues to be heard during “Away and Away”. Michael Brenner’s saxophone contributions to the song, however, are buried too much for my liking and thus dilute its effects on the cut. It is one of my favorite songs on All That We See despite being a bit of a lost moment. The album’s final song “Gourmet Mind” spotlights Brenner’s sax playing, however, to a much greater degree. This is an unusual performance with a herky jerky tempo, another dramatic and nearly theatrical Shapiro vocals, and some especially fiery rhythm guitar work. There’s no virtuoso trips going on here. The Brian Shapiro Band are playing as an unit on each of the tracks.

It’s an unified performance without a moment of outright weakness. Some decisions are more successful than others here, of course, no album is perfect, but the Brian Shapiro Band’s All We Can See is a home run caliber first release and sets the stage for a bright future ahead of these musicians.