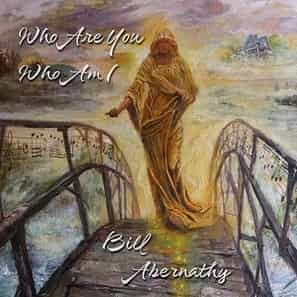 Bill Abernathy’s new EP release Who Are You, Who Am I? is the next chapter in Bill Abernathy’s musical journey. It is fair to say his relationship with music may be a bit bittersweet having stepped away for several years between his youth and late in the last decade, but gratitude is unspoken quality present throughout this EP’s four tracks.

He pursued music with a passion during his youth but personal turns in his life broke him away from that path. Abernathy, instead, eventually established a successful business career for himself, raised children, and did not pick up the guitar again until they graduated and began their adult lives. Abernathy discovered his muse waiting for him, as strong as ever.

The first song “More than Meets the Eye” belies his roots music reputation. Upending listener’s expectations isn’t something he chases with religious zeal, but there’s nevertheless a predilection for following his own path that helps the collection stand out. Blistering blues guitar punctuates the entire track and it frequently shifts gears without ever sacrificing its momentum.

The contrast between “More than Meets the Eye” and “A Thousand Wild Horses” is stark. The second song has an elusive magical quality that descends over listeners rather than imposing its will like the first song. His vocal approach is, of course, much different as well. His phrasing lulls listeners into a deeper suspension of disbelief and enhances the song’s wistful aura. The playing is captured well and uniformly excellent.

“The World’s Foremost Authority on Everything” is an enjoyable romp running at shuffle speed from beginning to end. It has a stronger humorous edge than anything else on this release, by a mile, but it’s never facile and its cutting comedic observations are never less than intelligence. It never sounds cluttered. The light-footed airiness heard here has effortless appeal.

“Who Are You, Who Am I?” is the perfect closer for this release. Many listeners, without revealing many details about the song, will find this to be the EP’s definitive statement, as most title songs are, and an exquisitely crafted career highlight. Abernathy’s voice has a weathered veneer convincing in every style he tackles. Many discerning listeners will be struck by the finesse Abernathy shows using space in this track; it contributes immeasurably to the atmosphere.

Based out of the Kansas City, Missouri area, Bill Abernathy’s preceding collections, 2017’s Find a Way and its follow-up Crossing Willow Creek are among the finest Americana themed releases available today, but excellent works of musical art regardless of genre. The new EP doesn’t suffer in their company. Abernathy’s songwriting and daring continue evolving with each new release.

Who Are You, Who Am I? doesn’t have songs addressing the pandemic, but it’s an ideal release for these times. It is full of personal vulnerabilities reminding us the value of our humanity and likewise contains an affirmative quality outstripping similar effort from many peers and contemporaries. His focus on writing the best possible lyrics never causes the music to suffer. Newcomers will likely keep coming back for more and Bill Abernathy’s latest release will reaffirm his talents for long-standing admirers.