CLOUDLAND Releases “Where We Meet” LP. 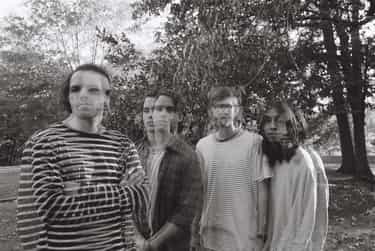 Reaching out to the audience from a distant perch shrouded in melancholic harmonies and impatient rhythms the same, CLOUDLAND don’t try to hide their discontent with the mainstream rock model in their first album Where We Meet. The record’s title track creeps forth in a haunting ascent towards a dramatic drop-off straight to the introspective, riff-oriented mayhem I’ve been missing in alternative rock these last few years, but it isn’t the only such example of engaging songwriting in this LP.

Aside from the brief interlude in “Sunday Evening,” all of the songs in this tracklist offer us something deeply poetic and unashamedly personal in the form of lyrics and mightily melodic instrumentation, blending the best parts of indie rock’s experimentalism with a now-retro consistency that has led to repeat listening sessions with the full album lately. The complacency of commercial artists is nowhere to be found in songs like “Overthinking,” “Walking Away,” “Lights,” and the lead single “St. Elmo;” in its place, there is only a bitter yearning that cuts deep if you can relate to the feeling of being unsatisfied by life’s predictability. These are crazy times, and in their debut record CLOUDLAND creates a sonic antipsychotic that those with a keen taste for quality could use a dose of.

The storytelling in Where We Meet can be allusive as well as far-reaching, but poetic benevolence is never swapped out for meaningless outrage simply to sell a narrative as being personal in nature. Frankly, I think this band has too much they want to talk about for disingenuous ranting to ever come into their cards, and rightly they keep any such filler off of the table in “Lights,” “Restless,” and my personal favorite, “Perfect Timing.”

CLOUDLAND are ready to slice into a tough topic if it means tapping into a catharsis none of us would have connected with otherwise, blending lyrical fantasy with emotional reality in a way that could have fooled me into thinking this was their third or fourth LP together rather than their very first. The sense of longing that we open up with in “Sunday Afternoon” never completely fades away but instead becomes a core element of the grander picture CLOUDLAND are trying to paint in Where We Meet. Muscular guitars add passion to their pursuit of a cleansing conclusion in “Coming Back” and even “St. Elmo,” but never take anything away from the black and white linguistic treasure this album will likely be remembered for.

There’s no doubt about it – CLOUDLAND’s debut is probably the most interesting alternative rock full-length that I’ve listened to since New Jersey’s The Brothers Union dropped a criminally underrated LP in Pain and the Opposite last year. They’re not overthinking any of this material, that much is obvious even from afar, but they’re also not failing to exploit the natural and rather blatant postmodernity in their sound, either. This could become one of the more intriguing alternative rock rookie efforts of 2021, and in any case, I would recommend sticking with this act just to see where the earthy cocktail of aesthetics they’re using here will take them in future offerings.