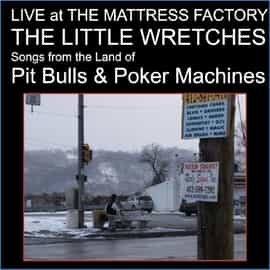 Live at the Mattress Factory from act Little Wretches is one of the most complex and complicated listens I’ve had in a long time, and for those reasons, the album is all the better for it. It’s an album I don’t know if it’ll be for everyone. It’s almost deceptive in nature as a wolf in sheep’s clothing, covering topics from love, loss, lust, and anger, but all in deeply rich and subversive ways all wrapped in a country/folk bow.

Take for example the seemingly indifferent ballad “No Witnesses” which starts with a preamble (since it’s a live album, there are intros to every song) about the seemingly tragic violent end to a child who was written off as being another statistic that represents the potential crime and pain in the world. Wagner, the lead performer seemingly endorses these views about justice, before pulling the rug from underneath you and challenging you that by taking these things at face value, you’re actually a part of the problem. It’s very aggressive in many ways despite how seemingly laid back and deeply intelligent and multi-faceted that Wagner comes across.

Sonically, it’s pretty straightforward. A combination of guitar, violin, and harmonica contribute to its “gee-whiz” apple pie aesthetic, which is what makes it hit so much harder when he dishes out uncomfortable ruminations on the end of nostalgia and rose-tinted glasses with the track “Cherry Tree”. Because of how emotionally and musically dense this album is, even for a live performance, you can kind of hear Wagner lose steam by the end of it. He never phones it in, and the passion is still there and very rich, but you can feel that even he feels the weight of his own powerful words.

Speaking of words, this album is stacked with clever wordplay and observation, many of them having dual meanings. It’s what’s almost shocking about the three most relatively straightforward songs of the bunch; “Father’s Day” which sees Wagner look on past almost “Leave it to Beaver” style antics of his father, “Preacher Girl” which sees Wagner inhabit the body of his younger self lusting after the proverbial forbidden fruit stuck behind a wall of religion, and closer “May you Never be the Child of a Realist”, which as the title implies covers the limitations placed on many youths by their parents to take up more safe and “traditional” paths.

For an album like this with references to philosophy and religion, you’d think it would have the power to come across as pretentious or impenetrable, but more realistically, it feels like that one friend at the coffee shop you know, who reads Sartre for fun, but he also like Marvel movies. Affable and ponderous, but never naval gazing and well-rounded. Some points of view I can see some take umbrage with, and it’s a personal performance that doesn’t feel like Wagner is yelling his opinions at you, but he’s very outspoken in what he believes is right. If you want a musical experience that’s ear protein for the soul, this is it.