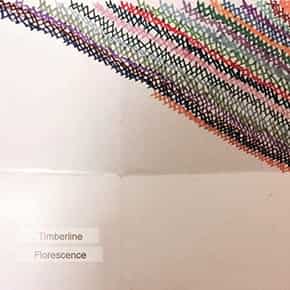 Like a strong summer breeze, the strings that embrace us in the opening bars of “Temporary,” the first track in Timberline’s 2020 LP Florescence, glide through the air around us and impart a youthful lack of inhibition to anyone within reach of their melody. The vocal harmony isn’t quite as retrospective in tone as “Better Days” is, but I don’t know that “Temporary” could’ve set the pace for what comes next had it not been as tempo-driven as it is in this scenario. “Horsetooth” similarly uses its delayed beat to stir up as much angst as it can in its first half before turning us over to the open-ended catharsis of its second, and as the instrumental “Jeep” comes into focus, it becomes clear that Florescence is more a concept album than it is a longhand sampling of what Timberline’s music is all about.

“Second Guess” follows the same tonal trajectory “Jeep” does, but its fractured lead vocal has more kick than I was initially expecting it to. The ache in Timberline’s singing is impossible for us to get away from, but it doesn’t sound self-indulgent to me at all. Instead, when it truly takes center stage in the Say Anything-style “August Snows,” it feels as personal as a page torn from someone’s diary. Florescence has a lot of moments in which its tracks feel cuttingly intimate, but this is part of the reason why brutally simple songs like “So Lost,” “Hi,” “Anon #4” and “Telogen” feel just as larger than life as a more radio-ready piece like “Static” does.

Making a filler-free LP looks pretty easy when you’ve got someone like Timberline at the helm of the project, and in single-worthy tracks like “Long Sleeves” and “Now,” we feel as engaged with this player as we would in the fully instrumental piano ballad “February 13th.” Even the segue songs here sound heavier than anything I’ve heard on the FM dial lately, and personally, I don’t see where tracks like the collaborative “Shade” and extended “Towhee” wouldn’t fare pretty well on both the mainstream and indie sides of the pop spectrum in 2021. This is a truly versatile offering and something that has made me interested in hearing what other works this singer/songwriter is developing at the moment.

The rollicking strings of “I Miss Now” represent the most buoyant instrumental moment in the record, but the spring in their step doesn’t discount the emotionality of the plodding steps in “Every Night” or the psychedelic folk track “Flannel” at all. Florescence closes with its title cut, the most conceptual song here, and for being an instrumental, I feel like it tells me more about Timberline than any amount of lyrics could have. His style of execution allows for an abundance of expression when there are minimal elements in the mix to contend with, and in this black and white LP, he doesn’t fail to flesh out the contents of his heart as much as he would his musical intellect (both of which are tremendously impressive). In short, if you’ve got an itch for new, provocative acoustic music right now, Florescence upholds the gold standard like no other.