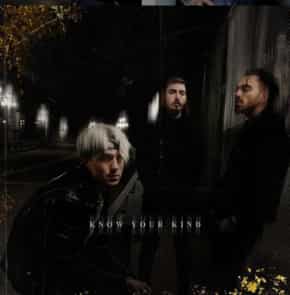 With their third release, a single entitled “Suicide,” Los Angeles rock band Gold Souls returns and will open a whole new slate of opportunities. The deceptively daring subversion of the act, killing yourself, in favor of a light-hearted approach pays off enormous dividends for both listener and band alike. Its attitude towards this dire subject matter is akin to the classic “Suicide is Painless.”

The three-piece is led by two brothers, vocalist Dré and drummer Ry, and joined by guitarist Danny Goldfarb. They have released an accompanying video for “Suicide,” and it accentuates the light-heartedness. It’s subtle, however, never slapstick. Gold Souls has a distinct California bent in the video’s use of colors, fashion, and smooth transitions from one shot into the next. Thankfully, there are far fewer jump cuts, unlike you see in many promotional videos, and the individuals involved turn in uniformly strong performances.

They are unabashed about their punk rock influence. You hear it throughout “Suicide,” but don’t let it lull you into believing that the song’s original musical skill is powering. Their compositional skill is apparent when you take in turn Gold Souls pulls off during the arrangement. Writing is one thing, however; meeting the song’s playing demands is another. Gold Souls, however, satisfies here as well, blending musical skill with attitude in a pleasing package.

The length may take some listeners by surprise. It shouldn’t. It fits in well with Gold Souls’ avowed aesthetic of crafting pop-punk with urgency and zero sideshows. They know how to play up the theatricality of the moment, it does during the song’s second half when lead singer Dré unleashes throat-shredding screams sweeping away any of the earlier light-heartedness.

Gold Souls aren’t stretching the genre’s stylistic vocabulary, but they come at the song with an individual take on its conventions. Newcomers will likely be eager to search out their earlier releases after hearing “Suicide,” and they should – there’s a case to be made that bands such as Gold Souls may be on the cutting edge of modern music with their energized riffing on a time-tested style.

The song’s production captures every nuance. There’s the full-on blast quality present with this song, no doubt about it. Everything works towards a common purpose. Gold Souls’ new single “Suicide” broaches typically taboo territory without offense or depressing listeners and rates among the year’s best singles. Let’s hope the band follows this up with an EP or full-length album. They have the songwriting chops to sustain longer releases, and many listeners will likely suspect such a moment will be when this band reaches their full flower.