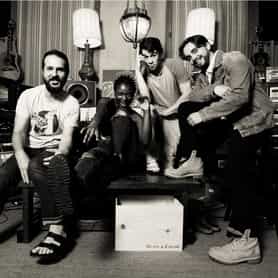 Minimalist ala “Care” and calculated in “Jump” and the clean-cut of “Cool,” there’s something rather efficient and cunning about the construction of most tracks in the new self-titled album from Whoop this season, which is quickly becoming one of my go-to alternative rock listens of the late year.

Without sacrificing any of the melodic wit and detail that separates their sound from that of the masses in 2021, Whoop is making it more than clear early on in the tracklist of this record how little indulgence matters to their artistry and, specifically, the hybrid aesthetics they’re developing as a unit. Stock cuts of “Cool,” “Demons,” and the aforementioned “Care” likely would have been enough to present us with a profile worthy of a second glance, but instead of giving us the most straightforward version of their identity, they wind up giving us a fair balance of evenhanded songcraft and thoughtful narratives that don’t feel condensed for the purpose of attracting a bigger audience. This is a band that wants to put themselves out there from the moment we press play, and were they not giving us the level of intensity they are, I might not have been as keen to name them a must-watch act this year.

“Jaded” growls with a guitar-born swagger that some had feared mostly dead by this point in the history of pop music, and yet I’m hesitant to describe this song as an outright throwback. Instead, much like the multilayered ballad “Nash Park,” “Jaded” feels like a combination of retrospection and revolutionary experimentation, the latter of which most of Whoop’s peers just don’t have it in them to engage with. “What I Want” is the punky intro that we need for “Smile,” “Cool,” and “Care” to feel as physical and worthwhile as they do later on in the tracklist, and I’d even say that the arrangement of these songs feeds into a theme of brutishness and pushy percussive swing I could get into any day of the week. Whoop doesn’t care about melodic fireworks as much as they do punching us in the gut with musical might, which makes them one heck of a diamond in the rough when you consider the era they’re coming up in.

I had no idea about this band just a couple of weeks ago, but with the release of their new eponymous album, I think Whoop has made it obvious that they’re not going to rest until everyone is turned on to their uniquely fierce brand of rock n’ roll enlightenment. Without likening them too much to the Seattle proto-grunge players who had no idea how valuable their combined artistic elements were until they were essentially too big to be cool anymore, this is a group that is sitting on something that could be big if cultivated in the right manner, and I would love to hear what they’re going to come up with next. This is a good list of base ingredients, and together they’re cooking up a seriously spicy alternative listen.