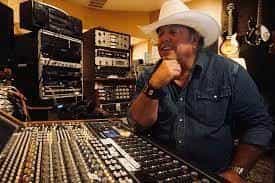 A lot of outsider influence has been penetrating a typically insular American country music underground in the past couple of years, but that isn’t stopping the likes of Mr. Jim Waneka from giving up an old guard melody like no one else can this December in the form of his new single/video combo “Two Angels.” Where everyone else is trying to experiment with the parameters of the traditional country music aesthetic, Waneka is a player undeniably committed to keeping the integrities of the past alive and well-guarded in the 21st century. “Two Angels” is a celebration of history, and moreover, the next chapter he plans to command over.

I love a solid beat when I can find one, and what we’re given to work with in this single is hot enough to burn a honky-tonk bar to the ground. There’s so much adrenaline waiting to come undone behind the tempo, but Waneka is so masterful at controlling the rhythm with his verses that the backend of the mix never falls into complete discord. He’s sitting on a ticking time bomb of a groove in this single, and it’s only through his disciplined release that everything can stay as stable and straightforward as this song does.

The guitar parts both acoustic and electric the same come into the track large and in charge, and I personally feel like they’ve got as much intensity to lend “Two Angels” as the vocal or the percussion does. There are a lot of singers who wouldn’t be able to contend with the girth of the string play in this performance, but Waneka never sounds intimidated by his surroundings. If anything, he embraces the hurricane of a harmony he’s setting up beside his band, which puts him in line with some of the wildest men to ever front a country outfit.

“And it’s the glory, that I now see / It’s their shields, that set me free / The crack of thunder, whimpered when they played / Two angels came for me, now I’m free” sings Jim Waneka in the chorus of “Two Angels,” and to some degree, these four lines do make up the narrative of the track better than any others do. This is a very cathartic piece of music both lyrically and musically, and for those of us who are big into the country music scene, it’s quite literally as close to a must-listen as you’re going to get this month.