“Death Eater” by Sin for Saints 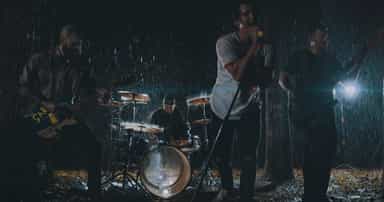 Heavy rock is nothing without big guitars crashing into each other, and when Sin for Saints were constructing their new single “Death Eater,” they weren’t looking to produce something cheap and flimsy. The only thing stronger than the emotional ache of the lyrics in this track is the attack of the fretwork, especially as it bears down on the chorus and leaves our vocalist almost no room to scream his verse to us. This is a song that was made to suffocate the white noise on the FM dial, and if you like post-metalcore concepts, “Death Eater” is a song that you need to be listening to right now.

The breakdown here has a really nice groove, and I would even say that it feels a little more retro along the lines of Pantera than it does something more commonly cited as an influence over the alternative metal movement (i.e. Machine Head, The Dillinger Escape Plan, etc.). The scooped EQ is only doing half of the heavy lifting in this single; to me, I think that the rigidity of these riffs is responsible for dishing out most of the crunchiness in “Death Eater.” Arranging matters, and this is a band ready to remind us of that.

This bassline is a total sledgehammer, but it works well for the beat that Sin for Saints is utilizing in the chorus. Rather than slowing down when things are getting hot, this band goes for the most incendiary climax they can handle, which is why “Death Eater” has as cathartic a release at its fever pitch as it does. They’re not running from danger here; they are charging after it and allowing the flames around them to add something intense and cutting to the big picture in the song. That’s thoughtful, and more than a lot of other rockers are doing right now.

I’m admittedly harder to impress than most critics when it comes to the heavier side of the rock n’ roll universe, but what Sin for Saints are developing in this track is just too crazy and crisply produced to be ignored. The late autumn/early winter is usually a pretty big time for metal and hard rock the same, but between COVID and the general lack of energy the underground has been experiencing the past two years, Sin for Saints is poised to cash in on an era that needs more rockstars – and especially those who are ready to bring the genre into the future.