“Flame Of Truth” by Chalice Collective 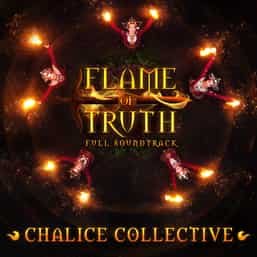 “Flame Of Truth” is the new single from Chalice Collective. A beautiful, and almost spiral-like formation, Chalice Collective takes special care in making this track a spindle of light and magic. All the senses come alive, as does the old noggin’. This song gets you both thinking and grooving. Imagine being stuck inside a Light Bright (remember those!) with a whole motherboard of colors at your feet. “Flame Of Truth” is a song that feels remarkably familiar because it’s such a quick rapport. It’s an instant connection.

Ready to surf into a new wave of sound and excitement? “Flame Of Truth” is like the oracle in terms of searching for inner peace and guidance. It’s not that the lyrics are so deep you need a dictionary to understand them – they are to the point. Chalice Collective is Sedona Swan Soulfire, Ayla Réalta and Chakaara Bliss (harmonies) and DJ Kallum. Soulfire is the creative director, songwriter and lead vocalist. The collective has a balance like I’ve never heard before. The only other song that came to mind that had the same drama and beguiling rhythms is Enigma’s “Sadness” (1990). I think “Flame Of Truth” further tips the scale because it has such a difference in vocal styles and changing vibes. It’s like visiting nearby countries in Europe that have completely different cultures, but they are bridged together by geography. “Flame Of Truth” fills the gap. It’s not typical and runs amuck within the EDM world. I also heard a whisper of the New Age genre too. It’s all together swell and endearing.

Bolstering the overall experience is an aura of unknown. There is definitely something mystical in the air, something we want to reveal. It’s not in a Doctor Who 70s themed-music sense, but heightened to a degree that you feel like you could float. I think in many ways chasing the feeling is brazen. I think Chalice Collective is cutting edge to push those boundaries. They allow the listener to really marinate in the soundwaves. If this song were an image, it would be of isotopes on a graph, with colors that range from marigolds to crimson reds. “Flame Of Truth” has so much going on.

It’s not an explosion of sound though – the listener can really melt into the beat. Soulfire’s vocals are poignant and precise. You know what she’s saying and you don’t have to be strained to understand her words. Believe it or not, that is still really welcomed. She also possesses a softness in her voice that is friendly. I really admired her vocal prowess. Some listeners might draw comparisons to Amy Lee (Evanescence) or even Melanie C. Within the confines of Soulfire’s voice there is an artist that has lived a wealth of experiences and she’s selfless enough to want to share those moments. I found myself pining for her voice. She really made the day go faster and the evening feel not as scary. “Flame Of Truth” is one of the year’s best tracks in any genre.