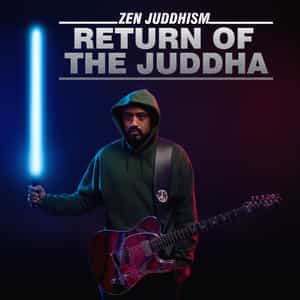 Zen Juddhism (Jude Ωne Eight and collaborators) have released their new album, Return of the Juddha. The album begins with Love Will Save The Day, a fuzzy homage to the post-grunge of acts like Hole. Pammie’s vox here provide additional depth to a thoughtful instrumentation while ensuring that the resulting effort is hooky enough to garner play on college rock stations. Sing My Song has Jude Ωne Eight blend a bit of southern rock with nineties alt-rock to make something funky, fun, and distinct from the corpus over music garnering mainstream media attention.

Glitter is one of our favorite tracks on Return of the Juddha. The track riffs off of a ska groove while bringing in a power-pop vocal style akin to Journey and Boston. A sterling example of how the band creates some unique and compelling music with each side of their latest. This experimental style continues with If I Knew, which starts off with a Rush-inspired guitar riff before Naomi Terry’s vox kick in.

I Am A Man has a crunchy, slinky sound that builds up to a tremendous crescendo as the band gets to the song’s chorus. Fans of the Butthole Surfers and Porno For Pyros will love what is going on here. We’re utterly enamored with the bass line laid down here. Test is the final effort on Return of the Juddha, ending the album with a bouncy beat – hints of The Pretenders and The Waitresses can be heard here. With so many singles held within, Return of the Juddha is an album that will keep fresh long after a listeners’ first experience with it.

Give Return of the Juddha a play and let us know what you think.

Top Tracks: Love Will Save The Day, Sing My Song