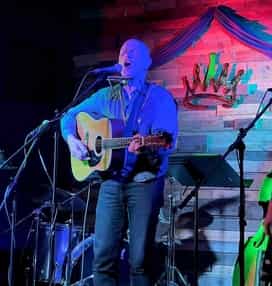 John McDonough’s songs are full of lessons learned from life, love, practicing psychotherapy, and a quarter-century of playing music in Austin, Texas. He makes his home in Chicago since 2020 and continues writing, recording, and performing with renewed vigor. The newfound vigor came ten years ago, in part, from McDonough’s decision to stop working as a practicing psychotherapist and, at long last, devote himself full-time to his art.

He’s released five albums of original material in that span. McDonough has played over 500 shows as well, performed as part of eleven major music festivals, and navigated several national tours. His latest collection We’ll Answer the Call throws down the creative gauntlet once again as McDonough sets himself the challenging goal of telling the story of Joe Rantz, the Washington Huskies rowing team, and their attempt to capture the Gold at the 1936 Berlin Olympics in EP form.

It’s a bold benchmark. However, the first track “Shooting Star” serves as a notice McDonough is up to the task. His impassioned and declarative voice commands the listener’s attention and he takes great care in enunciating each line to reveal its full intent. There’s a sense of things unspoken in the lyrics that’s hard to pin down, but when McDonough sings in the chorus about never allowing others to decide you are. It’s hard to come away from such lines without hearing a man who knows what surrendering personal agency costs someone.

“Love You Just for You” sparkles for several reasons. The production envelops his acoustic guitar with warm clarity and piano further fleshes out the song. McDonough’s voice pairs in a relaxed and inviting way with the female backing vocals but the defining musical moment for the song arguably arrives with its recurring guitar hook. The third song “Among the Stars” will leave few unsatisfied. His songwriting straddles the line between the artistic and commercial without missing a step. Scattered organ fills broaden the song’s color during its second half and the instrument’s presence in the mix grows over time.

The light lyricism of the guitar opening the title song belies its triumphant spirit. McDonough shows his musical hand soon enough, however, and alternating between slower simmering verses and romping choruses tackles songs of this “type” from a fresh angle. It’s the EP’s obvious traditional climax and the words capture the team’s final victory with plain-spoken language and significant details. The “falling action” for McDonough’s EP arrives with the last track “Point Me East” and it’s a poignant finale. He frames the song as a “flash forward” depicting Rantz in later years reflecting on the glories of his youth and the passage of time. It is unquestionably melancholy without ever sliding into despair.

It gives the EP a sense of completeness few releases this length or longer ever possess. It isn’t a term McDonough ever uses in the EP’s accompanying press and it’s easy to infer why, but We’ll Answer the Call is a conceptual work and he brings an appealing degree of linearity to his storytelling. It doesn’t come at any cost to listeners. John McDonough’s new collection is a serious work of musical art that will leave many listeners wanting more. Kim Muncie