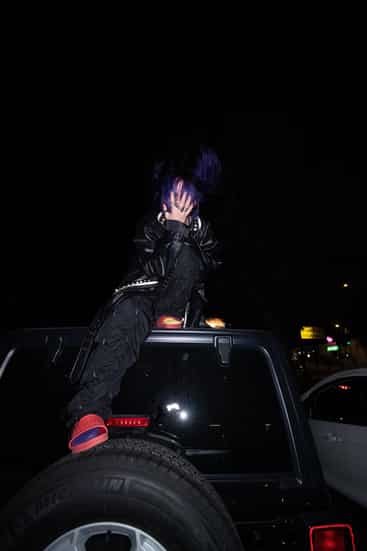 Psyclo has released her new EP, Slaughter House. Now residing in Los Angeles, Psyclo is one of the most mysterious and intriguing artists on the scene today. Her music sounds both modern and futuristic, finding the perfect balance between accessibility and the avant-garde. Psyclo attempts to find beauty in dark spaces, playing musical hide and seek, while maintaining a vaguely protected emotional barrier. She is disturbingly authentic and her introversion always seems on the verge of being confrontational.

“Broken Hopes And Dreams” is disquieting and emotionally inward, allowing us access into Psyclo’s headspace. Psyclo uses lethargy as a weapon, taunting the listener with calculated promises of passion. She never lets things get too far off the floor, though, firmly reminding us that this is her show, and her pace. This track serves as an effective introductory piece for Psyclo, as it encapsulates her default vibe. This is the type of song that Jewel could have only been capable of penning if she were born in 2000.

“Trephination” is an unapologetic and aloof display of power from Psyclo. Her explosive tendencies are further exacerbated here, as she suddenly breaks into rapping at various points in the song. In the video for “Trephination,” we can see just how socially advanced Psyclo and her squad are. Her L.A. residency gives her a sound head start, and she is designing the culture of our impending reality. With her insouciance as her calling card, Psyclo may just be the one of the most dangerous artists we’ve heard in some time.

Part of me is faded and cold/part of me is rusted and old. Self-loathing is on the menu for Slaughter House, but truth be told, Psyclo’s journey has brought her closer to self-acceptance. “Driving, Windows, Night” is cool, dreary, and visceral. For anyone who has lived in a major city, you can instantly resonate with the hollow and compressing tone of this piece. At some point, you find yourself becoming numb at the core, and unmotivated to reconcile.

“Dancing With A Phantom” is another example of Psyclo’s stunning originality. She’s digging deeper than most right now, to find reserves of her creativity that aren’t even fully ripened. But she’s smart enough to know that tomorrow isn’t stable enough to bet on in the music industry. The violins on this piece make it feel different than anything else on the album, taking a rare moment to romanticize the melancholy. “Dear Angels,” hears Psyclo finally surrender to the forces she has desperately kept at bay. Her vulnerability on this track is initially jarring, but somehow characteristic, as she makes her closing confessions.

Do yourself a favor and check out Slaughter House by Psyclo. This record isn’t just ahead of the curve, it’s got a two year head start. Psyclo is one of the most vital artists to emerge in some time, and what she does next is likely to have Earth-shattering repercussions. As for now, this record is a manifold work that completely consumes you, yet leaves you pleading for more. Slaughter House is now available on Spotify.