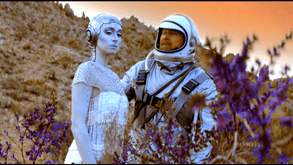 Nick Phoenix has released a cinematic video for the song ‘Andromeda’ from his ‘Wide World’ album.The video was shot in Pasadena, CA on the historic campus of the California Institute of Technology and various locations in the Mohave Desert.

Explaining about ‘Andromeda’, Phoenix says “The song is about an astronomer who dreams of visiting the Andromeda Galaxy and he designs a propulsion system. The song delves into whether he is looking to escape this world and all its pitfalls, or is he just secretly in love with his assistant here on earth?”.  He continues “We chose the Caltech campus because the setting speaks to groundbreaking science, but has a bit of a romantic, throwback feel.  The desert settings are in line with what some distant planet’s surface might look like.  We hope everyone embraces the imagery and how it relates to the song”.

Nick Phoenix is well known in the Movie & TV sync world as part of the highly successful Two Steps From Hell production company with partner Thomas Bergersen. Currently on tour in Europe, Two Steps From Hell has been producing all manner of film trailers and sporting events since the early 2000s: music to accompany the biggest imagery imaginable. Their work on movie trailers has soundtracked the worlds of ‘Star Trek’, ‘The Avengers,’ ‘Batman’, ‘Harry Potter,’ and more. They are the most streamed Film & TV music company in the world, have accumulated more than 4 Billion views on Youtube and 1 billion across all streaming platforms.

Phoenix began in Rock N’ Roll, and returned to it with his album ‘Wide World’, which was released earlier this year.  The album has been in the Top 10 of Amazon’s Classic Rock category for 8 weeks, and the title track made it into the Top 40 of the Americana Music Charts. The album features a stellar cast of musicians including members of Death Cab For Cutie and John Mayer’s band.

Plans are in the works for live shows later this year.