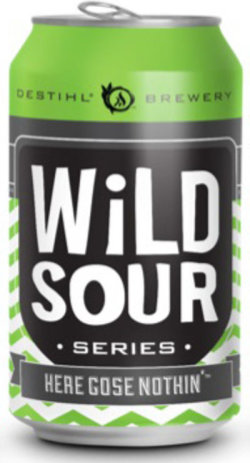 Here Gose Nothin’ is an effort from Destihl Brewery’s Wild Sour Series. The beer pours with a light orange / yellow color and no appreciable amount of head. The nose of HGN is a little salty, a little sour and provides imbibers with some idea about where the beer will ultimately go. The tartness of the effort is immediately discernible, while the savory aspect of the salt does well to change up the overall palette toward the end of the sip. The beer’s effervescence keeps things light and airy through the entirety of the can, while warmer temperatures keep things interesting. There are hints of grains and malt that can be picked out in these later quaffs, while the saltier side of things does well in establishing Here Gose Nothin’ as something wholly separate from other beers currently in the cooler. The higher than normal ABV of this gose adds further complexity to the beer, meaning that one will taste the slightest hints of astringency. It is this layered approach taken by Destihl that further increases the drinkability of the beer; one will easily be able to drink the four pack one after another and continue to find different twists and turns.

For information about the full range of Destihl offerings, visit the brewery’s domain. News updates and events are found at the brewery’s Facebook. We have reviewed Destihl’s Vertex IPA , Counter Clockweisse  and  Abbey’s Single previously in NeuFutur.