Many artists would claim that it was a productive year if they were able to complete an album. 12 to 15 songs was about two weeks’ worth of work for Melbourne’s Galliano Sommaville, who took on the massive mission of creating one song a day over the course of a year. Sommaville was experienced in the traditional approach to releasing an album, cutting his debut effort “Rain in my Bathtub” in 1996 and expanding his discography in the years that followed (Beach Holiday, Welcome to my side of the world).  After this goal had been reached, another large step was taken – Galliano has coordinated a 13-volume (and increasing) set of albums built off a specific theme. 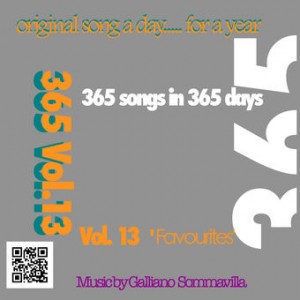 While the creation of music is near and dear to Galliano’s heart, so are a wide array of different pursuits. For example, he has donned a pedagogical hat and offers piano and keyboard lessons to those new to the instruments or for those looking to shake off the rest. Sommavilla has been a long-term supporter of the marriage of music and food. Think of it this way – whether one is preparing dishes or waiting for the entrée at a restaurant, music is likely to occupy a considerable part of the relationship. Sommavilla has crafted cookbooks with accompanying music to push the relationship to an entirely higher plateau – 2006’s Playing With Food and 2008’s Music to dine for.

In the second half of 2015, Galliano has kept busy. Aside from releasing the latest volume in his 365 (Original Song…A Day…For a Year) collection, he crafted a video for “Chill Me Now” in late June. To keep abreast of the latest in information about this extremely active musician, teacher, artist, and chef, visit his domain at http://galliano.com.au/ and his Facebook at https://www.facebook.com/galliano.sommavilla . The domain is great as it contains a great wealth of information about Sommavilla’s music, sample recipes, the latest in news, and the ability to sign up for his mailing list (something that Galliano has sweetened considerably through the offering of a free song download). Check out his forays into food, music, and pedagogy and let us at NeuFutur know what you think.