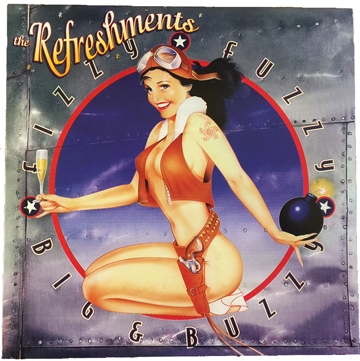 The now defunct Arizona-based roots alt rockers The Refreshments were long ago slapped with the dreaded “One Hit Wonder” label and while technically that moniker is true, like a slew of others before them, it was a distinction that they certainly never deserved. In 1996, the group hit top 40/modern radio jackpot when their wildly addictive single “Banditos” was inescapable for months (complete with the pop cultural name check of Captain Jean Luc Picard in the lyrics). The band’s major label debut sold well, but it didn’t turn over any other popular singles and after another solid full length a year later failed to get much recognition, the band quickly faded from the public’s attention and disbanded.

Frontman Roger Clyne, after writing the theme song to King of the Hill, quickly pulled together his follow up band, Roger Clyne & the Peacemakers, along with drummer Paul Naffah, and continue to record great southwest rock in the vein of Cracker and the Meat Puppets.

UMe has just released Fizzy Fuzzy Big & Buzzy on vinyl for the first time – just shy of its 20 year anniversary – and it’s a beautiful reminder of just how great this record was/is from start to finish. While “Banditos” got the full record label single treatment, it is far from being the best song on the album. Much like a Meat Puppets effort, you can almost hear the desert on the record and feel the sunburn. Songs like the slow tempo bar ditty, “Mekong,” or the love –is-a-bitch sing along, “Girly,” are still just as fresh 20 years on.  Sure there are some forgettable lyrics here and there – as is the case with most debuts (“Down Together” may be a fun songs, but there are some cringe worthy lyrics wrapped inside that one).

The Refreshments will always be remembered by most for “that one song,” but when you consider everyone from Concrete Blonde to Beck all technically fall into the One Hit Wonders category, you realize they’re in pretty good company.