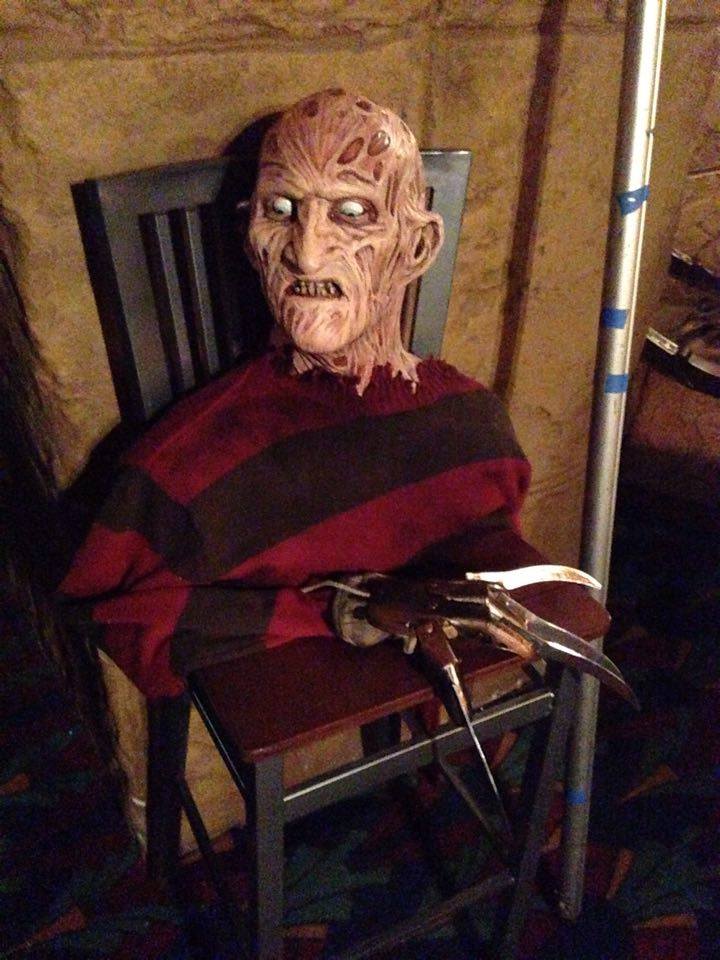 Housecore Horror Festival is a joyous occasion. Last year I had a blast in Austin and this year in San Antonio was no different. I drove up on a sunny Friday afternoon and entered the Holiday Inn around 2:00PM. The vendors were starting to set up and I had a quick chat with Bill Mosley of such legendary horror masterpieces as Texas Chainsaw Massacre and The Devil’s Rejects. What a nice guy! I guess that might not be what you would expect from a brutal killer like Otis. The first film I watched as the animated full length feature, “When Blackbirds Fly.’ This was an enjoyable warmup for things to come. The film takes place in a nightmarish landscape known as “heaven.” Go figure. There is a dark side, and without giving too much away, expect some truly twisted, psychedelic visuals when this one comes out on DVD. I then got some dinner and headed to the Aztec Theatre. Never have I saw so many awesome horror and metal vendors set up in one location! You could get anything from metal t-shirts from the likes of Black Sabbath and Venom to rare horror releases on DVD and VHS. I saw a copy of Make Them Die Slowly and just knew I had to have it. The classic artwork was unfaded, shining in it’s Wizard big box glory. A true cultural artifact from the 1980s video rental era. The first band I really paid attention to that night was Eyehategod. They are a long time favorite and played quite the powerful, smoke, swampy set. I would expect nothing less from the kings of swamp metal. It was a mix of classics and a few newer jams we well that I was less familiar with. Next up was Exodus and they did the Toxic Waltz all over my face. These thrashers are relentless and haven’t missed a beat since debuting in the 1980s, proving thrash metal is here to stay. I was utterly impressed. Saturday was what I really anticipated. The day started off with the blood curdling “American Guinea Pig:Bloodshock.” Do you like physical and psychological torture? Fuck it, just go see this movie. Director Marcus Koch is one sick bastard. The conclusion to this film is one of the weirdest and wildist things I have ever seen. Gore and sex like you have never seen. trust me. Holy shit. Just thinking about it gives me a sadistic giggle. I roamed the hallway for a bit and then ran into the mythical man known as Jon Mikl Thor. He was quite the gentlemen and agreed to a picture with me. I have been way pumped up for his new documentary “I Am Thor” ever since reading about it. The film was surprisingly well made and emotionally engaging, Thor is not just a Metal God, but also a flawed human who has been through many ups and downs. And did you know that the Misfits once asked him to sing for them in the late 80’s. He said no! Good call, Thor. You are way cooler than those schmucks. This film deserves to be seen and could be appreciated by people from many walks of life. Bravo to the film makers and Thor for making such an honest, compelling piece of cinema. I stuck around for Rock N’ Roll Nightmare, the amazingly cheesy 80s horror film starring Thor. Dave Hill and Phil Anslomo gave a really funny intro which everyone enjoyed. I’ve seen the film before and didn’t mind seeing it again. I laughed my ass off and cheered for the epicly silly last scene in which Thor battles Satan. So freakin’ metal.

Unfortunately I had to head back to the non-metal and horror universe after that and missed a bunch of cool bands that night and the next day. That’s okay though. What I did experience was beyond cool. I even picked up a Redneck Zombies t-shirt before making the hour and a half trek home. Thanks again to the organizer of this festival for having me back. I can’t wait for 2016’s activities.