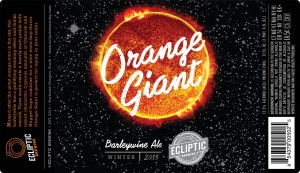 The considerable bitterness of Orange Giant (80 IBU) provides a sharpness to the brew that wipes clean imbibers’ palettes. The 12.5% ABV ensures that one will struggle to get through a single 22 ounce bottle of Orange Giant, so bring along a friend to experience this limited release. Ecliptic has also released a bourbon barrel-aged variant of Orange Giant for distribution solely in Oregon; this version kicks the ABV up to 13.8%.

For more information about the entirety of beers that Ecliptic releases, visit their domain. The company maintains Facebook and Twitter accounts to keep their fans up to date about new bottle releases, events, and anything to do about the company. Pick up a few bottles of Orange Giant, drink one fresh and keep a few set up in your cellar to see what flavors increase in prominence, which become more muted, and how the overall taste of the barleywine changes over the passage of time.