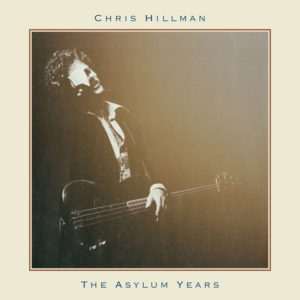 As co-founder of the Byrds, the Flying Burrito Brothers and dependable solo artist, it’s reassuring to see Chris Hillman get his due with the re-release of two of his earliest going-it-alone records.

Originally released in 1976 and ’77 on Asylum Records (at the time, home to just about every Southern California Country Rock band that mattered), Omnivore Recordings has just put both releases on one 20-track album. The songs come from “Slippin’ Away” and “Clear Sailin’” (clearly g’s were in short supply in throughout most of the decade).

Though it definitely has that late ‘70s Laurel Canyon vibe, “The Asylum Years” still houses some of Hillman’s best solo work, especially off the arguably stronger “Slippin’ Away”. Songs like the title track, “Down in the Churchyards” and “Take it on the Run.” Though not as consistently solid, the follow up –making up the second half of the album – still boats some great songs; like the bass-heavy “Playing the Fool” and the equally funky “Lucky in Love.”

In the decades since these two albums were originally released, Hillman has gone on to put out more great music, as part of other bands and through additional solo albums, but “The Asylum years” is still a reminder of just how powerful his earlier material was/is.