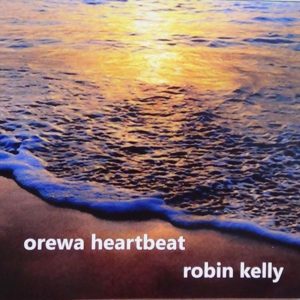 Physician and author Robin Kelly has pursued a musical career for some time now and continues achieving startling results with each new release. His fifth studio recording Orewa Heartbeat is an outstanding collection of songs aiming to delve deep into the reality of our experiences while avoiding any self-indulgence common to less artful practitioners of the form. Much of Kelly’s Eastern influenced belief system works its way into attitudes in his songs, but much more as a generalized mood rather as a polemic or willfully instructive. The lack of heavy handedness in his spirit is notable. His musical acumen is quite sharp, as well, and the baker’s dozen songs on Orewa Heartbeat are never short of entertainment value. The potential for indulging cliché is pronounced with this style, circa 2018, but Kelly keeps things cut close to the bone and seeks to express himself as clearly and eloquently as possible.

“Waiting for Me Too” brings us up close to the immense humanity behind Robin Kelly’s songwriting. There’s a notable amount of intimacy surrounding the song despite the obvious quasi-classical musical setting and both elements move seamlessly through the entirety of the cut. Kelly doesn’t possess a traditionally beautiful singing voice, but his emotive capabilities are palpable and enormously entertaining. There is some commonality between the opener and third song “Truthseeker (Song for Pete)”, but there’s less of a reliance on orchestral elements than we’ve heard in the earlier tunes. Instead, it brings some nice color to the song and meshes well with more traditional instruments moving the song along. The parenthetical part of the title is reflective of a trend on Orewa Heartbeat where Kelly “dedicates” songs to particular people, but there’s never any lack of accessibility in these songs. “Country Mile (No One Comes Close)” is one of the simplest, most artfully handled classic country themed songs on Orewa Heartbeat and it has an appealing gait that recalls the past yet provides plenty of entertainment for listeners.

One of the more successful numbers on Orewa Heartbeat is “I Apologize”, a clearly emotional track revolving around his vocal and the crystalline, delicately rendered piano playing. His lyrical talents are given quite a spotlight thanks to the spartan sound of the arrangement and the vulnerability invoked by his vocal has a practically quavering, incandescent quality. “Would It Be Enough For You?” has a personal lyrical bent, but lightly so, and Kelly refrains from tipping over into heavy handedness and inaccessibility. There’s a decidedly Americana feel to many of the songs on Orewa Heartbeat and this track is one of the finest, albeit a bit melancholy, and has superb touches like harmonica playing imbuing it with that classic lonesome sound.  There’s some light post-production echo applied to his vocal for “My Secret”, but it’s one of the albums more unvarnished moments revolving around his singing and some straight forward acoustic guitar playing. Piano returns to a place of prominence with the song “A New Day Has Begin (Song for Gaza)” and it’s accompanied by some lush strings neatly dovetailing into both the vocal and piano playing. Kelly’s talent for writing profoundly human lyrics free from dogmatic nonsense is vividly apparent with this track. He ends Orewa Heartbeat with the album’s purest solo performance “Someone Else’s Dream” – solo meaning there is nothing but his voice and piano powering the song towards a satisfying conclusion. The album deserved an emphatic period at the end and Robin Kelly’s provided it – the baker’s dozen worth of songs on Orewa Heartbeat are fine, but this finale is among its finest.