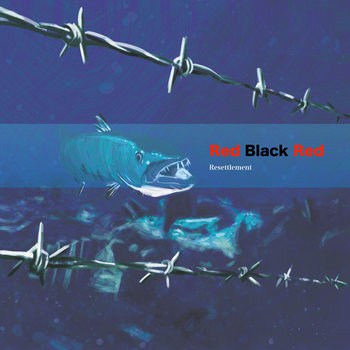 Enrico Fernando’s Red Black Red project debuts with Resettlement, an eight track first effort that makes clear this New Jersey based songwriter and multi-instrumentalist demands serious and widespread attention. The songwriting is inspired in large measure by issues close to Fernando’s heart and his labors on making the release reality reflect his intimacy with the subject matter. You hear that intimacy in even the most brash, abrasive moments on Resettlement. There’s a bedrock rock music influence powering these songs but the electronic rock sounds in the music are important and direct a number of the songs. Despite that however, there’s still a very even handed balance embodying the album as a whole and the obvious time he put into assembling and recording this collection. Red Black Red’s Resettlement is one of the more important releases in any style you’ll come across in 2018.

“Kindness” opens the album on a vibrant and promising note for the release as a whole. If this song made nothing else clear, it makes it obvious that Fernando has every intention of taking on complex thematic material with the confidence that he can do it justice without ever resorting to heavy handed writing. The probing ear for significant musical and lyrical detail distinguishing this song is a hallmark strength of the album on the whole and never lapses. We hear it manifested in a very different way on the album’s second song “The Scientist”. This is much more challenging musical fare than we’re exposed to with the album opener, but the industrial/metal aspects of the song don’t sound entirely out of place in the context of the overall presentation. Nor does the welcome shift in tempo and mood that comes with the track “Debris”. The title suggests something a little more distanced and reflective and the song itself doesn’t disappoint. It gains much, as well, from the deliberate pace and the near grandeur it achieves marks it as one of the more successful numbers on Resettlement.

“Dream in Fevered American” has an evocative title, perhaps one of the best on an album full of them, and the musical landscape proves its equal. This is, as well, one of the finest construction jobs on the release and the inevitable of its changes is a bit predictable, but in a very satisfying fashion – experienced listeners will know where Fernando is going, but they will thrill to hear how artfully he gets there. “Resettlement”, the album’s title song, is the most memorable guitar driven track on Red Black Red’s debut and gains a lot, as well, from Fernando’s raw and emotional singing. The finale “A Blessed Day by the Ocean” is quite the aural assault, never so overwhelming that its unapproachable, but definitely possessing an alternating fierceness between passages of all out electronic rock attack and tense, claustrophobic sections adorned by little more than percussion and a particularly tortured Fernando vocal. Resettlement doesn’t pander or take short cuts and the glaring individuality of the release adds weight to its claim on being one of 2018’s most satisfying releases.